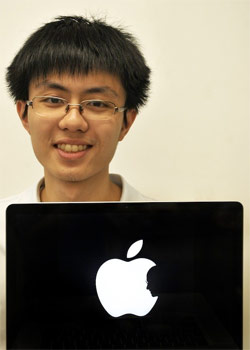 The death of Steve Jobs was understandably central focus of the media last week, with many outlets issuing special editions (great one from BloombergBusinessweek whose layout was as simple and elegant as Apple’s designs), and the tributes highlighting his genius in technology/design and branding/marketing. (Did you know that MoMA has 25 Apple products in its permanent collection?  Thanks, James Stewart in The New York Times on Saturday.) One of the best tributes was the graphic to the right created by a Hong Kong design student, Jonathan Mak, 19, which became viral wallpaper but was still simple, elegant and anything but cute.

Nobel prize for peace was awarded to three women last week, including Tawakkul Karman, a Yemeni journalist and human-rights activist who started Women Journalists without Chains in 2005, which has been advocating freedom for SMS news services, which had been controlled by the government. Interesting to note that a digital-news-type service was part of the peace process.

The numbers are definitely growing and now the media attention from old-school traditional sources, with even some suggesting logos (The New York Times op-art over the weekend); Andrew Ross Sorkin checking out the site on behalf of CEOs for safety?; a few prominent and positive op-ed pieces; occupiers spreading to other cities; and the second edition of The Occupied Wall Street Journal, a four-page very broad broadsheet, with no masthead but pretty good graphics and photos.  More and more news outlets are setting up tripods and trucks downtown.  This story is not going away anytime soon and gaining ground through all media channels.