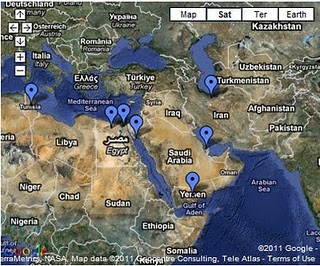 Protests in the Arab world continued last week, with the opposition defying the military in Bahrain and concerns of civil war increasing in Libya. Social media continued to play a role in helping to gather protestors but access to broadband networks is significantly lower in these nations, compared with Egypt.  Elsewhere:

Reported over the weekend was news that Stanford University is considering opening a campus for applied sciences in New York, responding to requests from the Bloomberg administration to institutions to submit plans to build facilities at city-owned sites. The plans are very preliminary and other schools are also making similar decisions. However, the potential extended-campus idea highlights the "business" of education and the rise of the borderless campus as many US institutions have opened campuses around the world, and INSEAD has done the same in Singapore and Abu Dhabi. No doubt, too, that social media and online education will speed the growth of a borderless campus as quads go virtual, like libraries and counselors.

Quote of the Week

Indiana Gov. Mitch Daniels, speaking at the Conservative Political Action Conference last week on the budget deficit and the need for quick response, and referenced in Peggy Noonan's column Saturday in The Wall Street Journal. "We must bring that air or urgency to the spending crisis. It is our generational assignment . . . Forgive the pun when I call it our 'raison debt.'"