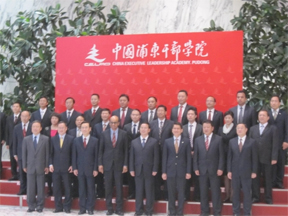 The Economist recently reported that the Chinese Communist Party recently began sending some of its members through training programs designed to help them deal with the modern media.

While exact numbers are not immediately available, the Economist reports that "fewer than 100,000 have so far received training" (implying, at least to me, that the number is somewhere near there). In addition to those Chinese nationals, an additional 4,000 foreigners, such as Venezuelan socialists and Russian bureaucrats, have also participated, talk about client (state) service!

This initiative has been taken in response to the growing rise of a more assertive media in the country, where the fourth estate had traditionally been subject to fairly strict government control and previously could be relied upon to toe the (literal) party line.

These programs involve both classroom instruction as well as simulated media encounters, wherein party officials play the roles of not only the government spokesperson, but also the interviewer. Some of the advice sounds quite similar to the advice we might provide to executives, such as being fully prepared and avoiding jargon when plain language will suffice. But one piece of sartorial advice might be a bit more narrowly tailored: "Red ties are acceptable on happy occasions. But if your boss is wearing a red tie, you should not. Don't steal the show."

While The Economist article focused on China, certainly governments around the world could benefit from media savvy officials. Which raises an interesting question, would governments who find their leaders media chops wanting be best served by internalizing a training regimen, turning to a friendly state (e.g., Venezuela and Russia above), or bringing in private sector professionals? Please feel free to offer your thoughts in the comments.