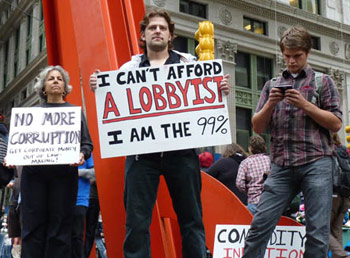 Everyone has their own point of view on the Occupy Wall Street movement. Some people passionately support the cause. Some adamantly oppose it. I was among the group that tuned it out (I know, I know, it’s a PR no-no to ignore a newsworthy event). Until, that is, I found myself debating with my boyfriend about it while cooking dinner Thursday night.

He’s captivated. I, to say the least, was not. So we got into it. To me, it was just noise—complaints without solutions. To him, using social media to build a grass-roots national movement was fascinating. (Yes, we’re both communication geeks. He’s in advertising. I’m in PR.) As we continued to talk about it, I found myself focusing on exactly what it is about Occupy Wall Street that rubbed me the wrong way: I don’t know what the occupation is about—specifically.

Perhaps my favorite element of public relations is message development. I’m a nerd for it. Successfully turning a zillion different jargon-laden thoughts into interrelated, coherent messages on a daily basis? Yes, please. And what’s that? Those messages help tell a story that could positively impact people’s lives? Even better.

For example, I got:

Most strategic messaging includes pointing out a problem (or problems) and then providing actionable solutions. When you take the time to look at all the separate issues Occupiers are addressing, it becomes clear that there are core themes: the wealth gap, military spending, management of the budget, etc. Part of the challenge Occupiers have in gaining support of even more Americans is that it takes work to pick out the themes, draw out the messages and find the cohesion beyond “we’re angry.” If the Occupy Wall Street brigade can focus on the why behind “we’re angry” (let’s focus on like, top three reasons or something guys), it bring us closer to a proposing solutions. And once you have solutions in the holster, the conversation can really begin.

I picked up my paper Friday morning and saw that the Volcker Rule had been leaked. The rule is an attempt to limit financial risk at some of the country’s biggest banks (that is a super bare-bones explanation)—and it has caused quite a stir on Wall Street and in D.C. The thought that popped to my head though, as I was reading was that the Volcker Rule, popular or not, was a proposed solution. It was included in Dodd-Frank and now regulators are writing the rules to implement the law. Problem identified, solution proposed. Before I even got off the subway I texted my boyfriend a novel about how impactful Occupiers could be if they used something like the Volcker Rule as an example of D.C. moving too slowly to implement changes that should protect the country’s finances.

And just like that, I realized I’m no longer tuning it out.