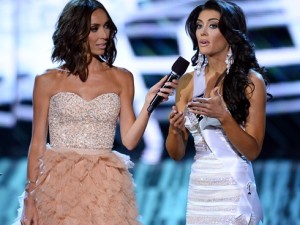 No one said that being a pageant contestant was easy.  Especially if you are entering into one of the world’s largest pageants - the Miss USA competition.  But this week Miss Utah made being a pageant contestant look damn near impossible.  The Daily Beast is even calling Utah’s Marissa Powell the next Miss Teen South Carolina for flubbing her interview question on Sunday night’s airing of the 2013 Miss USA Pageant.

The question was: “A recent report shows that in 40 percent of American families with children, women are the primary earners, yet they continue to earn less than men. What does this say about society?”

An easy question it was not, but Miss Utah’s response made headlines all around the world and even earned her the number one trending topic spot on Twitter earlier this week.  You can watch a clip of her answer here.

It’s no surprise that Marissa did not win the top spot on Sunday, but does it really matter?  She’s been making more headlines that the new crown holder.  Does anyone even remember her name?  She’s also been making her rounds on the TV news circuit in an effort to defend herself, and prove that she can provide a coherent response.

The old saying goes, any PR is good PR.  Do you agree?  Is negative PR really all that effective?  Last year, New York Times’ columnist, Gene Marks, asked the same question. Ultimately, he found that while negative PR may help build awareness and attention in the short-term, the long-term effect of negative, or in the case of Miss Utah, embarrassing PR won’t help the overall brand or reputation of an individual or business.

If Miss Utah wants to remain relevant and regain a positive image, what she needs is an effective crisis communications plan.   She should creative a proactive campaign in which she positions herself as a thought leader on an issue that she is passionate about, whether it’s equal pay for women or not.  The more she gets out into the media to communicate her message; the sooner people will start to forget about her embarrassing moment last weekend.