Picking Sides; Are Both Sides Victims? 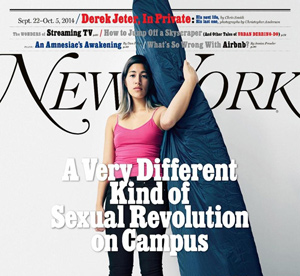 As the year came to an end, we saw a lot of situations of shattered reputations in the press. The fragility of a brand name is clear for any large scale scandal that doesn't get good PR coverage. In December, an article was published in The New York Times about Paul Nungesser, the accused rapist of Emma Sulkowicz (also known as "Mattress Girl"), a well known student from Columbia University. Sulkowicz came into the spotlight near the end of 2014 after the start of her campaign "Carry that Weight" to raise awareness about sexual assault in colleges. She carries her mattress around campus wherever she goes, to signify the weight she has been burdened with as a result of being raped. Her efforts sparked national attention, and the campaign grew.

Her goal is to carry the mattress until either Paul Nungesser is expelled, or leaves Columbia. After Columbia found Nungesser "not responsible", Sulkowicz decided to use this campaign to take the story into her own hands, which definitely got the attention she needed. When faced with a devastating situation, Sulkowicz was able to use the media proactively to take control of something that was once uncontrollable. Her campaign "Carry that Weight" also doubles as her senior thesis for her visual arts major. This all resulted in Sulkowicz receiving awards from the National Organization for Women, the Feminist Majority Foundation, and she has been recognized by countless top-tier newspapers and foundations, and given video interviews for Time magazine, and even appeared publicly at a press conference with Senator Kirsten Gillibrand. This helped contribute to the nationwide movement for colleges to change their policies.

Rape in colleges is something that is seriously under-reported and often dismissed without proper investigation, but after the jaw-dropping case from UVA turned out to be fake, (also 2014), we have to wonder whether this type of protest is warranted. While it was a good strategy for the movement, and Sulkowicz's reputation, it had the opposite effect for Nungesser. In The New York Times article previously mentioned, Nungesser spoke out about his life after being accused. It is no surprise that he has been made into a pariah at Columbia, and he points out something that should be given proper consideration.

"The mattress project is not an act of free expression—it is an act of bullying, a very public, very personal and very painful attack designed to hound [me] out of Columbia." In a country where our justice system is designed with the presumption of innocence; ("Innocent until proven guilty"), shouldn't someone that isn't proven guilty be able to live a life where they can go to classes without seeing themselves as the target of a national protest? And shouldn't they be able to defend themselves in a way that is comparable with the accuser, so that their voice can be heard, as well?

Sulkowicz has gained support and attention with many asking the question, if the accusation was false, why would she go to all that trouble? Mattresses are heavy! Someone with that type of dedication must be telling the truth. One might ask whether creating her own artistic brand name could be her driving force. Cases like these are extremely difficult. On the one hand, Sulkowicz should have the right to protest in whichever way she chooses.

The justice system can be wrong, and the same goes for those in colleges and universities. Something should be done about a case that a university fails to punish, and freedom of speech should protect her. However, is the media fairly portraying what happened? Sulkowicz has countless supporting articles and websites, but the accused has much less support. Is it right for the media to pick sides as well?

Working in PR, it is easy to understand the importance of public perception. That's why our jobs revolve around maintaining good press. While Sulkowicz has gone from college student to a heroic icon of anti-rape activism, Nungesser has subsequently been made into the poster boy for unpunished rape and sexual abuse. Unfortunately, Nungesser has been used for a campaign that is part of a much broader problem. A reputation can be tarnished after just one rumor, let alone an entire national campaign. Especially for students that have no history in the media, this will be something that defines them for years to come. The only thing that can be done now is to hope this type of issue is something we will experience less of in the new year of 2015.

Sophia Offner is an intern at Prosek Partners

Picking Sides; Are Both Sides Victims?

What's Your Return On Luck?