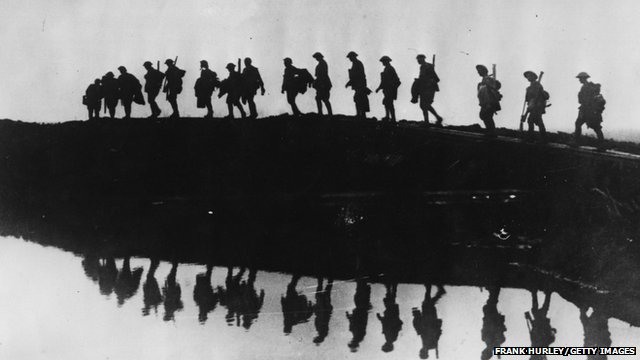 They shall grow not old, as we that are left grow old: Age shall not weary them, nor the years condemn. At the going down of the sun and in the morning, We will remember them.

This year marks the twin anniversaries of two totemic events. On the one hand, we mark 100 years since two pistol shots on the streets of Sarajevo plunged first Europe and then the world into what became known as the Great War. On the other, it is 25 years since the fall of what was then consider to be the last authoritarian ideology and the final collapse of that cruel barrier which Churchill dubbed 'The Iron Curtain'.

It is hard to imagine the realities of that first terrible global conflagration. Scars were carved so deeply into each national consciousness that are still raw today. Over 888,264 men died (with approximately two million more wounded) serving in the British Armed Forces—a generational loss which we still feel today, so much so that this number has taken on a significance all of its own (see here and remember: each individual poppy is a human life). After four years of violence, only 53 villages from across the British isles who sent men to war could welcome them all home safely—even today these are known as the 'Blessed Villages'.

The end of the Cold War is often viewed as being synonymous with the fall of the Berlin Wall in 1989. A global conflict of a different form—terrible in its own manner but fought at arm's length; far from our shores. Though I thought I understood the significance of the event, it was not until I travelled to that region (Poland in my case) that I became aware of its enormity. Travel to a country where the sickle and hammer is as despised as the swastika and you begin to understand that this too was a war of liberation. Visit the Warsaw 'Museum of the Uprising' (see here) and you will be confronted in the starkest possible terms by the literal meaning of the word 'evil'.

Yet to read the news today, you would be forgiven for assuming that neither event was of much significance. Syria, Iraq, Afghanistan, and Libya—the list of conflicts where British and American service personnel are currently engaged is seemingly endless. Equally, there is no shortage of 'next ones'—Ukraine, Iran, North Korea—a closer world has not made it safer. History has not ended. A new and virulent ideology of hatred and repression has emerged in the Middle East and in the Ukraine Europe is once more a warzone.

So, we can never forget those men and women who stand ready to serve on our behalf. They go to war, so we don't have to. They fight, so we can choose to turn away. We are free because they enable us to be so. The freedoms and liberties won in Flanders and epitomized by a unified Germany are preserved because of their sacrifice.

Never has this act of national remembrance been more critical. Today, where fewer people than ever, in Britain and elsewhere, have direct contact with the Armed Forces (i.e., a close living relative serving or having served) we must remember collectively those millions of individual sacrifices.

Post Script: When next you pause in remembrance, I would be grateful if you would remember Rifleman Andrew Fentiman. We served in the same Battalion at the same time (7th Battalion, The Rifles) and, though I cannot claim to have known him, I felt genuinely touched by his death. You can find the announcement of his passing here.

Luke Willoughby takes a look at the evolving trend of ESG and Impact investing and how these concepts support both financial return and social values.

Can BlackBerry Right the Ship?