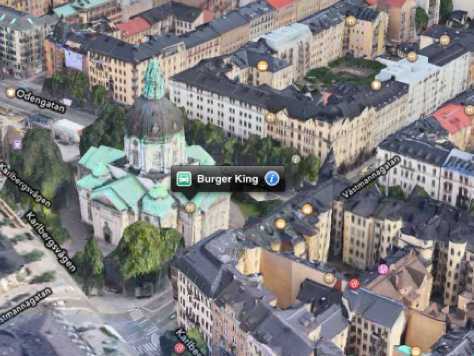 This has been a big year for Apple. Of course, every year for the past five years has been relatively big for Apple, but hey—we finally have the iPhone 5! And iOS6! And a fantastic new maps app!. . . Wait, what's that? Hold on, there was drama surrounding the app because it didn't have the normal coat of polish that most Apple products have? And both Google Maps and Youtube apps are no where to be found in iOS6? Oh my, I feel weak, I need to take a breather.

Apple recently released the  iPhone 5 along with iOS6. With these releases, they've introduced their own maps and navigation app to questionable fanfare. Should Apple be concerned about the more-than-usual bad press?

Okay, I'm good now. I just needed to cuddle with my functionally sound Samsung Galaxy S3. Amazingly, it was able to tell me how to navigate from freak out mode to sanity once again. How do the following amazingly intelligent individuals feel about Apple's current drama?

"They should be concerned for a few reasons, but not the obvious one some people may raise: will the maps issue have any impact on sales of the iPhone 5? I think everyone agrees that the five million devices sold over the first weekend – after it had been well-documented that the maps app was an issue – makes that a moot point. And let’s also differentiate between the maps and navigation. While of course the navigation relies on the accuracy of the maps, the turn-by-turn voice navigation and easy-to-read street signs are clearly an upgrade from Google. But yes, the accuracy is an issue and currently Google by far has the better overall maps app.
Further exacerbating this situation is the attention they covet and force upon themselves. You can’t hold press conferences and make a spectacle of a phone launch and then not expect the media and consumers to exploit issues when they develop. They set themselves up for this extra scrutiny in comparison to a more subtle launch; although, they were not going to hide this flaw and hope they could work out the issues by themselves before anyone found out.
What they do need to be concerned about is the loss of their total control and dominance over consumers. No longer will people follow them blindly and assume everything works perfectly, nor defend them as vigorously when issues arise. They will be like every other company that has to prove itself, even to its most loyal customers. Tech reviewers will spend more time trying to exploit glitches and imperfections. Apple can regain control by launching the next device with no significant issues, known or unknown, and position maps as a one-off issue and not a slippage in engineering, marketing, quality control or communications.
What could they have done better this time around? Simple: better manage expectations. More specifically, they should have: 1) Let people know maps was still in beta mode, just as Siri remains on the iPhone 5 after her prior introduction, and that only a full product introduction will allow them to work out the known kinks with the help and support of dedicated Apple users; and 2) They should have continued to offer Google Maps until the next iPhone comes out, at which time their own maps app should be able to stand on its own. Enacting one – and certainly both – of these management-expectation scenarios would have bought them more time and allowed them to stay in front of the situation instead of appearing to be caught off guard.
I’m sure a few people were fired and some new policies for product introductions will be put into place so this isn’t repeated in the future. Now if they could just control Foxconn." ~Brian (@bschaffer)

More opinions after the jump >

"The thought that "Mapgate" will somehow undermine Apple's ability to delight millions of people around the world with their products is misguided and irrational. Largely the result of linkbait articles, mostly penned by self-professed haters and those without a complete grasp of the situation, this wave of unnecessary alarm (remember “Antennagate”?) will abate in the very near term. In the end, very few people buy an iDevice primarily as a GPS unit, and this is a temporary inconvenience, at worst. Judging by the 5 million iPhone 5 units sold in the first weekend, it is clear that the vast majority of customers are largely unconcerned.
To be fair, I do believe (and others across the web have noted) that Apple could have avoided some of this attention if humility was a bigger part of their presentation.  As noted by Jean-Louis Gassée currently general partner at the venture capital firm Allegis Capital and former president of Apple's products division (h/t loopinsight.com):

“The ridicule that Apple has suffered following the introduction of the Maps application in iOS 6 is largely self-inflicted. The demo was flawless, 2D and 3D maps, turn-by-turn navigation, spectacular flyovers…but not a word from the stage about the app’s limitations, no self-deprecating wink, no admission that iOS Maps is an infant that needs to learn to crawl before walking, running, and ultimately lapping the frontrunner, Google Maps. Instead, we’re told that Apple’s Maps may be  “the most beautiful, powerful mapping service ever.”"

Apple has had no trouble calling TV a hobby and Siri “in beta.” A little candor about the state of the Maps data may have helped to stave off some of this venom. Probably not, but maybe.
But let’s focus on the facts for a minute. Google and Apple had an agreement for Google to provide data for Apple’s iOS Maps app that has shipped on every iPhone and was available in every operating system upgrade UNTIL the advent of iOS 6, the most recent version. This was NOT a Google app.  It was an Apple app that relied on Google data. The actual reasons for Apple replacing Google as the backend provider of data have not been revealed. Many have speculated that control of the data, costs, or ongoing royalties could have been a factor. We may never know.
What we now know is (according to theverge.com and validated by Google chairman Eric Schmidt) Apple terminated their agreement with Google over a full year before it was set to expire. This would clearly indicate that Apple, knowing full well that their back end would be nowhere near as robust as Google's, was willing to ship the product and get out of that agreement now.  Whether operational, financial or competitive, this map marriage was clearly over. Even if Apple had waited until the expiry of that agreement, this issue would have still arisen. This is where the media coverage and the reality diverge.
Here is what most people don't understand and many journalists have failed to grasp. Map data is not created in a lab. The reason that Google's back end is so robust is because millions of people around the world have and continue to use it and help refine the intricacies of world cartography. Quite simply, the more it gets used, the better it gets. But, according to my calculations, that back end just lost about 200 million devices as millions of people upgrade to iO6 and new iPhones, iPads and iPod Touches continue to sell in droves. Over time, these users will help to populate Apple's database and make it more functional, robust and accurate, while no longer contributing data to Google's database.
It will take time to build up this data, but not nearly as long as is took Google to get their map data to where it is today, simply because of the depth and breath of Apple’s install base today. Instead of focusing on nascent Apple product which can only get better over time, I think the media should be focusing on Google's loss of users which they can now never replace.
Unless, of course, you believe that folks will give up their iDevices in droves to buy an Android phone.
Because the maps are better." ~Tom (@trozycki)
"This isn’t the first time Apple has come to market with a product with kinks. Remember Siri anyone? Apple could have avoided some of the hype around maps and navigation if they made it more clear that it was in beta. It’s really as simple as that.
Will Apple lose customers? Maybe a few, but not enough to bring the value of the company down. Are the majority of their products superior to those of their competitors? I think the masses would say “yes.”
If you dive a bit deeper here— the media is simply latching on to a reason to associate a mediocre launch with the death of Jobs. “Is this an end of an era?”  If you look at most public companies, CEOs may be important to the business, but the long term success of a company is not tied to a single person. The same goes for Apple.
Google is to search as Apple is to consumer electronics. How many failed projects has Google launched? About 8 trillion over its history. And how many buggy/failed services has Apple launched? Maybe 4 in its history.
Now let me ask you this—where do you go to search?" ~Bea (@BeaBroderick)

In the past week, Apple has issued an apology staying they are "extremely sorry" for the current maps frustration. Will it appease the storm of rage that is the Internet? Team Apple or Team Android? You decide.