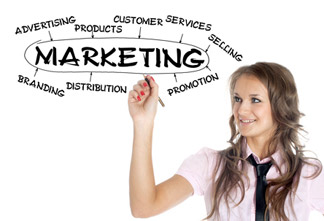 Let's talk about something truly sexy; let's talk about marketing. More specifically, have you noticed how marketers have been targeting the key demographic of women? Perhaps you'd like to partake of some recent proof. From music videos featuring John Legend's "You & I," Colbie Caillat's "Try," to Marvel Comics announcing a female lifting Thor's hammer, to the inspiring Always #LikeAGirl campaign, one would be hard-pressed to deny that the world is trending toward being more and more saturated with women-targeted marketing.  And there's more, but I only have so much time before your eyes glaze over from reading the results of my extensive Google search. But fear not, half-bored-to-death readers. Thankfully, I have the pleasure of working with several highly intelligent individuals who have offered to share their high-level thoughts on the subject at hand:

In recent months, there have been a number of videos produced by brands and musicians that went viral, and they all have one common theme - female empowerment. Is this just a marketing strategy to sell more products, or are women getting the positive attention that they deserve?

Advertising and marketing strategies are inherently selfish. First and foremost, they're produced to increase sales and promote brand awareness and loyalty. But that doesn't mean we as consumers have to be jaded enough to criticize brands who use female empowerment as a selling tool. As long as they do it respectfully, while maybe even trying to teach a positive lesson at the same time, I say more power to them.

The female empowerment strategy isn't anything new - Dove has been doing it for a decade. But there does seem to be a higher number of companies embracing strong women to sell their products in the past year, and they're getting a lot of attention. Under Armour just launched their women who will campaign, one small company produced an ad about menstrual cycles that went very viral very fast, and another start-up won free Superbowl airtime for their ad telling young girls to dream bigger than being a princess. While each ad's first priority is to sell a product, there's another underlying sell in each - a positive message for women, especially young women.

Young girls are very influenced by what they see on television and online, so I welcome any campaign with the aim to change their world view in a positive way. As a big sister to three teenagers, I'd rather have them watching a hair commercial promoting gender equality in the workplace over a half-naked model writhing around on the beach while eating a hamburger. So to answer the question: the answer is both. Companies may be trying to appeal to women's emotions and morals to sell more products, but the ones doing it right are promoting positivity and confidence for women at the same time. I welcome the change.

For those not familiar with Tavi Gevinson, she's been hailed as a wunderkind for having founded Rookie Mag, a website designed to facilitate conversations surrounding the experiences of teenage girls, at the age of fifteen.  At a TEDxTeen talk in March 2012, she delivered the following quote, which has since become one of my favorite things ever:

Women are complicated.  Women are multifaceted.  Not because women are crazy, but because people are crazy, and women happen to be people.

Not only does it encapsulate basically my entire feelings on feminism, it also serves as a reminder that there is a stigma around being a woman.  One that has been so deeply ingrained in our society that it is newsworthy to find marketing campaigns targeted towards women–other than those for feminine hygiene products, of course.

To answer the question fully would be to delve into a deep analysis of American society and summarize any number of collegiate women's studies class, but I'll sum it up with a simple sentence:  These female empowerment videos going viral just goes to show how powerful women have been all along.

Women comprise an awesome half of the population, and it's about time the media started recognizing that.

Though it is nice to imagine that women are finally getting the positive media attention they deserve, I don't believe this is entirely the case. Traditional, self-serving media will no longer suffice in a world where new content is generated regularly and only the relevant content is shared (and proliferated) via today's myriad social channels.  In a market where relevance determines reach, advertising/marketing professionals, artists, and other content developers are forced to be ever more creative in order to grab the attention of their target audiences and capture untapped markets. The notion that a positive message about women could garner so much attention is not empowering at all, but is in fact indicative of the reality of their portrayal, and the overall lack of favorable representation of women.

Promoting female empowerment hardly seems genuine or benevolent when accomplished through product advertisements and music videos; it seems to be a mere strategic play to capture a particular audience of women to whom this message is relevant.  And yet, I connect with an artist more when a song strikes a female chord, and I support a brand when I agree with the message it stands for.  Despite my skepticism about the underlying motives, there is certainly something to be said about good content; genuine or not, it truly is the key to the consumer's heart.

I believe this "women empowerment" movement being publicized is a way of positively marketing to women. As cynical as it may sound being a woman and all, I do believe along with the underlying theme of empowering young girls and women, especially our youth who are struggling with self esteem issues, depression, bullying and insecurities, this will help companies sell more products. "Women are responsible for 83% of consumer purchases in the United States" according to a reference in The Wall Street Journal's numbers guy, Carl Bialik's, article called "Who Makes the Call at the Mall, Men or Women?"

It's great to see campaigns such as Nike: "Voices", Dove and #Likeagirl empower women, but should a question also be why do women need such campaigns? When thinking about that question, I'm taken back to my days playing basketball. I remember in all my years a number of my games were poorly attended. Although the records showed the women's winning streak beat the men's by a landslide, we still couldn't fill the stands, resulting in some budget cuts. Although this could've simply been from a lack of school spirit, I think it is evident among a number of schools and especially in professional sports. WNBA games are so poorly attended that I could afford front row seats, which is a problem, because I could never afford front row seats at a NBA game. WNBA players also make less money than any NBA player, even the ones who don't come off the bench. After that reflection, that might be a reason why we need empowerment messaging.

So, yes, these campaigns are great, they tell us don't stereotype and market to women's needs, but they also make a positive connection to potential female consumers who have the spending power to purchase products. But I guess if a campaign wants to remind me to feel great about myself and empowered while taking my money all I can say is, thanks for the positive reinforcement, while emptying my bank account.

It's no question that female empowerment has become a key area of focus for marketers. While some agree that women are finally getting the attention they deserve, others–myself included–feel the trend seriously toes the line between being inspiring and downright insulting. Don't get me wrong, I'm all for girl power and leaning in, but does it have to be preceded by showcasing negative female stereotypes, body image issues and the like?

Furthermore, maybe some women just really like wearing make-up, hate getting dirty or fully embrace the fact that they can't throw a baseball. When did female empowerment marketing come to be defined by condemning anything traditionally classified as "girly?" If marketers sincerely feel the desire to be a force for change, they need to stop packaging the uplifting messages with the insecurities. The focus needs to be on promoting individuality and acknowledging that strong and confident women can come in many different forms. For now it just seems like a passing fad.

Clearly, people feel very passionate about this, and I can't blame them. Stay tuned for a second round of opinions, coming your way soon. Until then, do you agree or disagree, and do you want to share your own opinion? Let us know below!