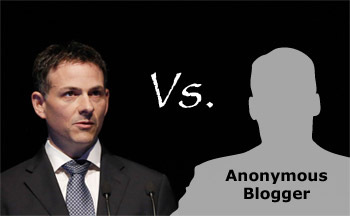 Tweeting. Blogging. Vlogging. What do all of these joyous pastimes have in common? They're all new media, and while there are innumerable influential sources for news and editorial content, the wild side of the interweb always finds a way to produce law benders and breakers. In a recent article written by Andrew Ross Sorkin via the New York Times, he shares insights into hedge fund manager David Einhorn's conquest to reveal an anonymous blogger that leaked information into private investment in Micron Technology. Needless to say, Mr. Einhorn was less than thrilled to have this story spread and is looking to make an example of an as-of-this-moment still anonymous individual. This situation piqued the interest of many people within Prosek, so a roundtable discussion was inevitable. As such, today's participants were tasked with responding to the question below:

Should citizen journalists be protected by reporter's privilege, or are they tempting fate by breaking news stories without any semblance of a protective proverbial umbrella?

And what did these brave souls have to say? Read on to find out.

1st Amendment, Freedom of Speech - Some argue, as Sorkin writes, that this is a 1st Amendment, Freedom of Speech case. It is not. What was revealed are Einhorn's/Greenlight's trade secrets, their proprietary information, which is protected by numerous laws enacted to guard companies' "secret sauce." But more importantly, it can be assumed with almost 100% certainty that whomever leaked this information signed a non-disclosure agreement, which renders the 1st amendment argument moot.*

*This was upheld in the Supreme Court case of 1980, Snepp v. United States.

Non-Reporters Breaking News - Now this is where Freedom of Speech applies. Under this right, anyone should be allowed to break news, but let's backtrack a bit here first. The invention of the internet created an interesting phenomenon; anyone can be a reporter by becoming a blogger. No one has to hire you, no one has to make sure you are qualified and no one can censor you. But when you dissolve the news reporting framework you throw away with it all the moral and ethical codes journalists are taught to abide by and which the public entrusts they obey. Eliminating this threatens the integrity of the news, opening the door for made up stories, sources, etc. There needs to be integrity in the journalistic process in order for it to serve its purpose, unbiasedly informing the public and challenging corporate America, the U.S. government and any and all issues that infringe on our rights and threaten our country.

However, on the flipside, if Einhorn prevails, such an outcome could also just as greatly threaten this integrity. The lifeblood of reporting is sources. It is with their help and willingness that reporters are able to uncover the truth and wrongdoing. If Einhorn wins, it could cripple this sacred relationship by discouraging people from being willing to be anonymous sources. And without them it could take much longer, if forever, to uncover some of the biggest cases of corporate corruption, rights' violations and "big brother" scandals, i.e. Watergate.

So what do we do? It's a hard question. Not rule on the case? Not legally allowed. Convince Einhorn to abandon his case? Cuts at the core of who we are as country. Unfortunately, we'll just have to wait to see what the outcome of this case is and hope it is settled outside of court.

Today's media landscape is a quickly changing one, and as new media begins to overtake traditional media, many of the traditional definitions and concepts will have to be reevaluated. As that happens it will be left to the courts and the legislatures to determine whether, and to what extent, new media contributors and participants (such as bloggers, twitter users and internet commenters) are entitled to the protection of journalist shield laws. Some level of protection is likely in society's best interest so that these citizen journalists are not intimidated out of acting as Brandeis' disinfecting sunlight. To take it too far risks nearly anyone to affording themselves the protection of these laws, possibly in ways that would hardly be termed socially beneficial.

For instance, what if the anonymous poster in this case learned of Greenlight's position through either a fiduciary duty owed to the firm or by encouraging another to breach their duty to the firm, established their own position, and then began disseminating information regarding Greenlight's holdings with the end result being the prediction that Micron shares would rise when the news broke? That hardly seems to be the type of conduct we would want to protect under the guise of journalism.

Accordingly, it may very well be that certain "citizen journalists" deserve, and should be extended, the protections of journalist shield laws. However, it would be folly to allow anyone with a keyboard and an internet connection to assume the mantle of "journalist" and enjoy these same protections, especially in situations where their "journalism" might be tinged with, or substantially motivated by, self interest.

The establishment of precedence in open court affects so many aspects of our society that there are no simple answers here, and forcing Seeking Alpha to reveal the identity of "Valuable Insights" would ripple far beyond Einhorn and Greenlight Capital. The potential impact that such anonymous leaks could have on the financial world is overwhelming to consider. But, are courts willing to appear to limit freedom of speech to intervene in what is largely a financial matter? And, at what point does individual financial loss begin to outweigh the implications of threatening the sanctity of a source's entitlement to remain anonymous?

It could be suggested that a regulatory body like the SEC have some authority to police certain parameters of the internet in an attempt to prevent illicit gain from the unauthorized release of confidential information. But, there are many who want control through the internet, and far more who want to protect the freedom of speech that has existed throughout the history of the web.  The internet by nature is conducive to anonymity and the instantaneous, widespread distribution of uncontrolled information. It has changed the landscape of journalism dramatically and transformed freedom of speech into a different beast entirely. The question we are challenged to answer is: can anyone be considered "the press" simply because they are distributing information online?

Several individuals are quick to point out in the online comments section of Sorkin's article that describing "Valuable Insights" as "not a journalist" reveals how "Mr. Sorkin has missed the transformation of business journalism in the past decade." Press or not, the information is getting out and that is the overarching concern. At the same time, failure to differentiate an established news outlet like The New York Times from a two-sentence anonymous post blurs a dangerous line and poses a real threat to Journalist's Privilege.

The press has standards by which it operates - a code of conduct and a business model that enables journalists to serve a useful and necessary purpose. Citizens have the freedom to say what they want, but the internet enables them to say it scot-free, instantaneously and to a mass audience. This poses an issue that we as a society have only just begun to fully grasp the ramifications of, and it's evident that some difficult decisions will eventually need to me made.

My short answer is "no" – citizen journalists should not have state shield law or other legal protections, and I doubt that any court will recognize reporter's privilege for this group of contributors. Looking past the citizen aspect, how does one broaden the legal definition of who qualifies as a "journalist"? Just bloggers or could anyone tweeting or posting to social media claim to be a journalist under an unqualified shield law?

Granted, a restrictive, old-school view is biased to those professionals associated with more mainstream print and broadcast media. However, extending reporter's privilege to citizen journalists and then navigating the separation between "citizen" and "citizen journalist" seems especially complicated. With the blending of personal and professional identities across online platforms – blogs, social media accounts and news websites, for example – would people have to add disclaimers or self-identify in profiles or before posting when they were assuming their "journalist" status?

Those are just a few issues that state legislatures and courts would have to grapple with in amending and interpreting current shield laws. Sure, this view is likely to have a chilling effect on those who anonymously contribute to Seeking Alpha and similar sites. Will anyone be as willing to post if he or she faces possible exposure and civil penalties? But I don't see how a clear standard is possible for applying shield laws to citizen journalists.

Should all new media journalists be protected by the same laws as traditional media, or should governing laws be amended to reflect an ever-evolving media landscape? Feel free to join in the conversation below.