Roundtable: Kim Kardashian is Filing for Divorce. So What, and What's Next? 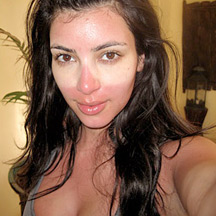 Hello followers of all things pop culture... and of Kim Kardashian. I know what you're thinking, Kim is AMAZING and AWESOME, and why would anyone have a negative thought about such an American icon? One might even call her an American pastime, but the not-so-hidden joke there is a little inappropriate for those out there in our younger audience. Also, for the record, I think the Kardashian family is the epitome of human-based entropy, but hey, at least she's pretty to look at, right? Yeah, that doesn't really help. Moving on...

Kim Kardashian is filing for a divorce. Should we care, and is her over-exposed career path in danger? And seriously... should anyone really care?

I don't think I need to say anything else, as I think my weightless opinion is now universally known. Let's move on to the main course:

So, does anyone really care about Kim Kardashian?

"Kim Kardashian… The reason Kim has a career is because we all tune in to her show and read gossip magazine stories about her life. I am by no means excluded from this audience.
In regards to her quickie-made-for-reality-tv-wedding (and subsequent divorce) it is likely that a majority of these events were a publicity stunt. Kim very well may have loved Kris but the allure and potential to benefit to her career clearly outweighed any actual logic. When you’re planning to marry someone, how is the future shared living situation and location NOT a topic of conversation? There was no feasible way for Kim to continue her career while living in Minnesota, like Kris desired.
From this small point alone it is clear that Kim at best—didn’t think about important questions before walking down the aisle; at worst—faked this entire relationship and wedding to make a profit.
Despite all of this I don’t think any of us will stop watching her. (According to her plan) we are so entranced with her life that we will continue to watch her and she will continue to make a hefty profit in the process. That’s Hollywood baby." ~Gabrielle (gabrielle-simon)
"It seems as if the world is moving toward bankruptcy, both economically and spiritually, and the Kardashians' popularity is one glaring indicator of this. Are we so lonely and disconnected that favoring fame-starved women who are talentless, neurotic and over sculpted is acceptable, if not commendable? Where are our heroes… the ones who help us become our better selves, and who represent qualities to emulate? Where are the people who are REALLY role models? Do we really want today's youth looking up to these types of public figures?

One thing is for sure—her 15 minutes of fame have long been spent, and I for one would prefer to again see her name in print never. Do you hear that, media?! Let's collectively move on." ~Shelby

"Now tell me, what about number 4 (seen to the right) is the item that resonates the most with me? Although, I did enjoy the planning of Kim’s wedding. So much so that I deliberately picked the longest check-out lines at the grocery store to devour every detail on the gossip columns. (Obviously if you just read tabloids, and don’t actually purchase them, you can’t feel guilty about it, or worry about how you should be spending your reading time on The Economist or Fast Company and the like.)
That really is what is impressive – the fact that that whether a fan or not – people are drawn to the Kardashians. If they don’t watch the show, they probably chat about them at the water cooler, read about them in their company’s industry-acclaimed blog :), and I know I am not the only one out there who can’t put People down once I pick it up (I know you’re out there. How does Kim get the shapely body?). I even had a client bring up Kim’s divorce as small talk before a conference call started.
The truth, I think, is that misery likes company, and the unfortunate reality is that there’s probably not one person who can’t relate to a relationship gone bad. The real-life issue that makes this reality star’s life believable, that is what causes the magnetic pull between your fingers and the tabloid. When Kris dropped her in the waters of Tahiti at their private villa and lost her diamond stud earring, and she cried hysterically, did you feel bad? Not me. I am pretty sure I would have cried too, but I also wouldn’t be wearing those earrings out on a dock, Tahiti or not! #NotRealLife. Feeling pressure not to let anyone down, wanting what you’ve dream to be really real... that sounds like you took the star out of “reality star”...#Reality. Imagine that, a true-to-life reality show moment." ~Mary (@marysullivan)
"Should we care about Kim's lighting-quick marriage as average consumers? No. Should the E! Entertainment Network care? Probably. This seemingly trivial 72 day marriage could soil the network's reputation, as allegations of an orchestrated wedding to increase viewings have been circling. One could say, the massive ratings (+4 million viewers) were the highlight of the short-lived vows.

Before news broke, the network had planned to rerun the wedding in prime time. With Kardashian's announcement, rather than pulling the segment all together in hopes of being viewed as a "sensitive" network, the second part of the showing included an onscreen announcement making the divorce public.

The question reality TV fanatics are now pondering is, was "Kim's Fairytale Wedding" a hoax? Was it a publicity stunt? Suddenly this real-life drama brings to light an uncomfortable conviction- is there really a distinction between reality and contrivance? One hopes that the media, in particular E!, would treat this issue with courtesy and diplomacy, however any pop culture junkie knows better. This television drama will be a media gold mine (and the proof is in the pudding—how many magazine covers and tweets have you seen discussing this very issue?!).

Some could argue that this is in the nature of the Kardashian family- their job is to be reality TV stars- thus, the drama induced (whether strategically planned or haphazard coincidence) is their product. As the Kardashian family has agreed to publicly document their lives in "Keeping Up With the Kardashians" along with the three spinoff series, the product is for sale. Ready for the publics' taking! But is it moral to treat a human being as a mere bankable object? Again, the argument can be made that that is how our society and economy functions- people provide a service for others to benefit from.

Thanks Kim, for clarifying what "forever" means- two months!" ~Virginia (@vafromca)
"Should we care about Kim Kardashian? I mean, no. We shouldn’t. But we do. I don’t exactly “keep up” with the Kardashians, but I did catch the wedding special on a snowy October day. I turned it off before the actual wedding took place and before I knew it KK&KH were headed to Splitsville. I can’t say I was shocked – but I did lose any motivation to catch the actual ceremony when E! would surely play the episode again on loop.
That said, this whole media storm comes just before “Kourtney & Kim Take New York” airs. Translation: Kardashian fans/haters can have a front row seat to the demise of the relationship they so closely stalked.
I see it now: November 27. Gyms are packed. People are huffing and puffing on the elliptical, working off their Thanksgiving meals. All eyes transfixed on the machine’s TV, eating up Kim and Kris. Kris will continue to say more of the same from the wedding special (“You can’t think for yourself,” “I’m my own man,” and my favorite reality check, "Four years ago you sold clothes in a boutique in the Valley”). Kim will run to her family to try to demystify his behavior. A fight with Khloe will ensue(duh).
All this drama will simply mean more Kardashian Ka-ching and fan adoration. Kim will have another rock on her finger within a year, preaching about how she never knew true love “till now.” Her reputation, finances and marital status will be right where she wants them.
But while Kim and Kris are the centerpiece of this divorce fiasco, there’s someone else we’re neglecting to mention. We learned a valuable PR lesson months ago on Unboxed Thoughts: sometimes not being mentioned is the best PR of all. Fading into the background can be a power move. NOT being included in a story can make it the best (non)placement of the year for a client.
As the Kardashians chirp about Kris Humphries and peck at his soul, Scott Disick could be the biggest winner in this break up. In fact, if I could offer one piece of PR advice to any character – errr – family member looped in to this mess, it would be to dear Scott: Keep your head down, dude. Godspeed." ~Amanda (amanda-kiely)

I have to admit, I really don't sympathize with Kris Humpries. He'll no doubt become richer from this short-lived relationship than he will from his less-than-illustrious basketball career. I'm sure he'll get his own Bachelor show, and his own reality series. And if anyone I know watches these... shame on you. What do all of you think, does anyone think positively of the Kardashians?