Roundtable: The NFL Season Has Begun, Who's Got Game? 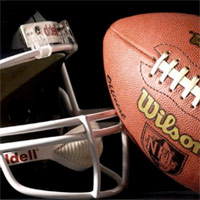 Greetings football fans and spontaneous clickers alike to yet another round of the Unboxed Thoughts Roundtable. I know what you're thinking: Sure, there are those that might argue that baseball is the American pastime, and I do love myself a great game of stick ball, but let's be honest here. Football is the bread and butter of the American sports world. That brings us to our topic...

Despite early fears of lockout preventing the current season, the NFL has had its first games. Which team(s) are you rooting for, and who has the best chances of going all the way to win themselves the elusive Lombardi Trophy?

For the record, I'm a Giants fan. This is a legacy passed down from my father, who enjoys incessantly yelling at the television every week as the Giants disappoint him time and time again. I have come to expect the stale play-calling, but do enjoy watching the occasional miracle plays (that occur far too rarely). But hey, it could be worse. I could be a Jets, Eagles or Packers fan. Ooooh snap, did Aaron just go there? Oh he did. Read on, sports fans, to see just how sassy the previous word-smithed sentences were.

Who's got the best football team?

"Since I was a young lad, I have bled green. My first words were mama, dada & Emerson Boozer. I have lived through the agony and the ecstasy of being a Jet fan. Mostly the agony.
And then: Rex. He's got an enormous mouth and the gut to match. He is brash, unpredictable and sometimes lewd. He says what's on his mind, and is not afraid to take chances.
He also happens to be one of the best coaches in football, and the reason that the Jets will be perennial contenders. 2011 will be no different. The tools are there: maturing QB, decent (yet strangely anemic this year) running game, tons of downfield targets, a top three defense. Marginal special teams, I will admit, but that is because of personnel, not lack of effort. But that is about all.
Did I mention the coaching staff? Rex is the face and a great defensive mind, but the brain trust he has behind him is amazing:
Brian Schottenheimer, Offense: So smart he actually OUT-COACHED HIMSELF twice last year. I was there for both of them.
Mike Pettine, Defense: In his first season as a defensive coordinator in the NFL, he installed a completely new defense and fielded a unit that ranked first in points allowed, total defense and pass defense. Plus the guy looks like he could rip off your arms in a bar fight.
Mike Westhoff, Special Teams: Just looks smart… oh wait. He is. Under his guidance, Jets' special teams has improved every year.
Sanchez, Greene, Holmes, Keller (Sanchez's favorite target)... even an aging Tomlinson. Despite key defections, a defense that is just getting stronger... Revis, Pace, Harris, Scott to name a few. They play as a unit and they come prepared every week.
I don't see glaring weaknesses in this team. I do see that they play in a division where three teams are currently 2-0, but I am not a believer in the Bills. It will come down to the Pats, as it always does. Pats, Jets, everyone else. That's how I see the AFC." ~Tom (@trozycki)
"I root for the NY Giants and despite Monday night’s win against the Rams I just don’t like our chances this year. Eli Manning seems to be regressing as a player, and on the plays where he actually throws a decent pass his receivers are not pulling them in. I can understand why Plaxico Burress wanted a fresh start elsewhere, but both he and the Giants would’ve been much better off if he’d re-signed. The Jets have plenty of other weapons and Plax would have a much bigger role on the Giants. No one has done a better job hauling in Eli’s erratic passes over the years than Plax.

The coaching is abysmal. Tom Coughlin preaches discipline and every year the Giants make too many stupid penalties and mental mistakes. They have two quality running backs to work with, yet they insist on passing the ball like crazy. The coaches don’t play to their player’s strengths and the players all seem like they want to leave. I think the players have tuned the coaching staff out.

The NFC East is a tough division. Despite recent injures the Cowboys are more talented. The Redskins are better coached and have already beaten the Giants. And the Eagles despite all their problems have more talent and are better coached. When the smoke clears I think the G-Men are an 8-8 team, and Coughlin is a goner. It’s about time. This is a team in desperate need of new leadership and fresh ideas.

So who do I see going all the way? Unless someone besides the NY Jets beats New England this year I think the Patriots make it back to the Super Bowl. The Saints are also a very dangerous team, but I think the Green Bay Packers (if they can stay relatively healthy) are still the team to beat." ~Rob (@RobBabecki)
"Lately I’ve been accused of being a front-runner and it’s all-true. You see I’m a Packer fan, and have been one since my dad bought me my first football jersey in 1966... you guessed it, #15 Bart Starr, from the Super Bowl One Champion Green Bay Packers. So yes, I'm a front-runner because they continue to win. 9 World Championships and 4 Super Bowls. “Title Town” to you and me. Thanks Dad.
For a little historical perspective I’ve included a championship scoreboard*.
Green Bay – 13 Titles: 4 Super Bowl Wins and 9 Championships
New York Giants – 7 Titles: 3 Super Bowls and 4 Championships
Philadelphia – 3 Titles: 0 Super Bowls and 3 Championships
New York Jets – 1 Title: 1 Super Bowl and 0 Championships
As far as this year’s NFL season, I see no change at the top. The Packers are positioned to repeat as World Champions. Remember the Pack overcame half a dozen devastating injuries to key starters last year on the way to winning Super Bowl XLV. All those injured Packers have returned this year, giving and already talented squad considerably more depth. However, in Green Bay the system is king. The Packers, led by Super Bowl MVP Aaron Rodgers, have too many downfield scoring weapons on offense. Defenses just can’t cover everyone, leaving someone always open for Rodgers to deliver a scoring strike.
I wish my colleague’s well this season and hope to see them in the playoffs. Beating the Giants, Eagles or Jets on the way to Green Bay’s fifth Super Bowl win would just make the title that much sweeter.
Super Bowl Prediction: Packers beat the Patriots 34-31.
GO PACK GO!" ~Dave
*Source: http://en.wikipedia.org/wiki/History_of_National_Football_League_Championship
"What authority do I have to speak on how the NFL season will transpire? Why, just last year I guided the "Spiffy Spikes" franchise to a dominating championship in the inaugural CJP fantasy football league. And obviously, successes in fantasy football are directly analogous to one's knowledge/prognostication abilities to real football. Obviously.

With all due respect to my esteemed colleagues and their personal convictions/delusions regarding their respective teams, I firmly believe that the Philadelphia Eagles will emerge victorious upon the close of the season. Even at CJP, I am not alone in making this prediction; we actually boost a somewhat solid contingent of Philly fans among our NYC and Boston-homer ranks.

A more specific prediction—en route to this vanquishing of all that is evil and wrong with the world (namely, the Cowboys and the Steelers), expect to see the Eagles deliver another blow to the collective psyches of New York Football Giants fans, perhaps once again courtesy of DeSean Jackson's north-to-south (and east-to-west) running abilities.

In the AFC, the Jets actually look pretty good. And I’m not ashamed to say that. See, the Jets are actually quite similar to the Eagles. Each team is touted for their stifling defensive capabilities. They both wear green and white. And their primary cheers both involve spelling the name of their team. Thankfully for the collective IQ of Jets nation*, the name “Jets” only consists of one syllable, four letters, and zero blended sounds. Though even that isn't enough sometimes. And another key difference between the teams is that, brand-new stadiums notwithstanding, the Eagles are actually welcome in their own home.

In response to Mr. Zamba's rampant Green Bay Packer fandom: I have nothing. Yours is a respectable organization, and cheese also happens to be one of my favorite foods. Godspeed (until you reach the NFC Championship, of course).

With that, I wish all my compatriots good cheer and good football through the season." ~Jake (@jsd5020)

* "Jets nation" ranks somewhere in between the nations of Tuvalu and Nauru in terms of both size and relevance.

I need to commiserate with Rob. I feel his pain, angst and loathing. I'd say a lot of us do. Also, I need to lend some sympathy to Tom, as I expect he'll need it in a few months. Also, I expect Rex will find himself with a foot in his mouth. (Note: That last sentence has an implied double meaning, but only Rex will acknowledge which meaning he prefers. Awkwaaard. But I digress, for the game is afoot!) As for Jake and Dave, well... What do you think? And hey, why no Patriots fans? Not like I care, of course...

Roundtable: How Will Trump's Reputation Be Affected By a Presidential Run?

Roundtable: How Will Trump's Reputation Be Affected By a Presidential Run? (Round 2)