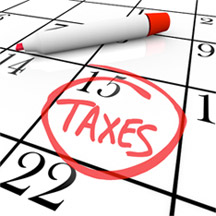 The month kicks off with April Fools' Day. Here is a look-back at the biggest pranks in 2013.

Panama plays host to the World Economic Forum on Latin America on April 1-3. The conference focuses on the region's efforts in maintaining its economic growth, boosting the diversification of its economies, increase its productivity, fuel competitiveness, enhance trade and invest in human capital.

Something to look forward to on April 15 - a total lunar eclipse is visible to those in Australia, the Pacific, and the Americas. Speaking of April 15, don't forget to file your taxes. Here are "10 Tips for Getting the Biggest Tax Refund."

About 36,000 runners compete in the 118th Boston Marathon on April 21. Runners will commemorate those killed by the bombing at the 2013 race.

Celebrate Mother Earth on April 22. This year's theme for Earth Day is Green Cities, which focuses on initiatives that help create sustainable communities. How will you do your part?

Rounding up the month, PRWeek hosts its PR Summit 2014 in London on April 29. A one-day strategic PR event, the focus of this year's summit will be on the evolution of PR in the global and digital landscape.