Happy New Year! Here are the noteworthy events and facts to kick start the first month of the New Year. 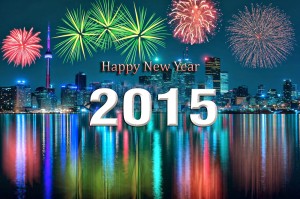 Ring in the New Year however you see fit, but make sure you lock up your car. According to the National Insurance Crime Bureau, the number of vehicles stolen on New Year's Day is much higher than any other national holiday.

The sixty-eighth session of the United Nations General Assembly has named 2015 the International Year of Light, which "aims to raise awareness of the achievements of light science and its applications, and its importance to humankind," and the International Year of Soils, which is "to increase awareness and understanding of the importance of soil for food security and essential ecosystem functions."

A few key happenings to take place in Europe in January: Lithuania joins the euro, while Germany leads the G7 as its president and Latvia starts its first six-month term as the president of the EU.

New year, new skills. From "effective crisis response" to "Twitter PR secrets," the PRSA has you covered as you look forward to another successful year. More details here.

Davos-Klosters, Switzerland, hosts the World Economic Forum Annual Meeting on Jan. 21-24 with the theme of "The New Global Context." View the agenda here.

Bookmark these non-fiction book launches in January: Marissa Mayer and the Fight to Save Yahoo! by Nicholas Carlson (Jan. 6), Rumsfeld's Rules: Leadership Lessons in Business, Politics, War, and Life by Donald Rumsfield (Jan. 6), Will the Real You Please Stand Up: Show Up, Be Authentic, and Prosper in Social Media by Kim Garst (Jan. 13), The Logic of the Market: An Insider's View of Chinese Economic Reform by Weiyang Zhang and translated by Matthew Dale (Jan. 16), How to Fly a Horse: The Secret History of Creation, Invention, and Discovery by Kevin Ashton (Jan. 20), The Content Revolution: Telling a Better Story to Differentiate from the Competition by Mark Masters (Jan. 31).

Emma Townsend takes a look at well known UK political editor, Robert Peston's "vision of uncertainty" and what's next for the world in 2017.