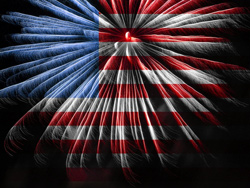 The U.S. celebrates its 238th year of independence on July 4 and 155 million hot dogs are expected to be consumed on this day according to National Hot Dog and Sausage Council. Perhaps this is why July is also National Hot Dog Month.

The FIFA World Cup wraps up on July 13. Did you know that South American and European countries have won the World Cup 9 times and 10 times respectively? There has been no other continent which has produced a World Cup Champion. Other major sport events to watch in July and August include the Tour De France (July 5), the golf British Open (July 17), and the tennis US Open (Aug. 25).

Want to learn more about Mexico and how "US companies can best leverage the $507 billion import-export market with Mexico?" The Economist hosts a free webinar on this topic on August 5.