Labor Day celebration in the US takes place on September 2. Say goodbye to the summer, and hello to the fall TV lineup, and NFL, NHL, and NCAA Football seasons.

Speaking of fall TV, the season kicks off on September 3. Get that DVR ready for a number of new shows including Sleepy Hollow, Marvel's Agents of S.H.I.E.L.D., and The Crazy Ones with Robin Williams.

Russia has been in the news quite a bit recently and it will continue to garner global attention as it plays host to the G20 Leaders' Summit on September 5-6 in St. Petersburg.

Rosh Hashanah, the Jewish religious New Year, is celebrated on September 6 around the world.

A gold iPhone? We'll know for sure on September 10 as Apple is speculated to unveil its next iPhone along with other buzzy product updates.

Convene, formerly Sentry Centers, is an annual event hosted by PRWeek, bringing together senior executives and agency thought leaders to lead a conversation on numerous trend topics. This year's event is on September 17 with a focus on paid, earned, shared and owned media and how to maximize this mix to elevate brand and corporate profile.

September 22 marks the first day of Autumn in the Northern Hemisphere. What to expect weather-wise? Check out this map courtesy of accuweather.com. 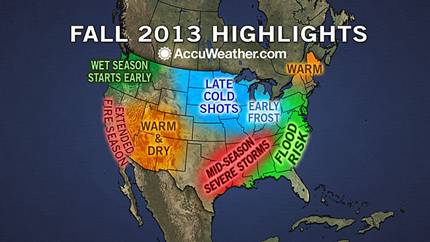 With the theme "Mobilizing for Impact," former President Bill Clinton hosts the Clinton Global Initiative Annual Meeting on September 23-26 in New York City. The meeting will focus on driving effective action on global challenges by mobilizing the right people and resources. Confirmed speakers include President Barack Obama, Hillary and Chelsea Clinton, Sheryl Sandberg and many other leaders from around the world.

If the CGI is holding its annual meeting that also means it must be Climate Week (also being held from September 23-26)!

The Times Jumps on the E-Coupon Bandwagon