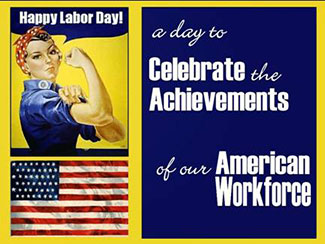 September is National Preparedness Month, which is sponsored by FEMA. Learn more here.

The PRSA has also declared September to be Ethics Awareness Month. Visit the PRSA's website for upcoming related activities throughout the month.

September is synonymous to fall TV, so here's a handy premiere calendar for your reference. Clear out that DVR . . . stat!

Labor Day celebration in the US takes place on September 1. A few interesting facts about labor in the U.S. according to the 2010 Census: There were 13.4 million Americans who work from home in 2010 compare to 4 million in 1999; 25.3 minutes is the average commute time with New York and Maryland top the longest commute list with 31.3 and 31.8 minutes, respectively.

The rumor mill is working overtime to guess the actual launch date for Apple's iPhone 6. Guess no more. Apple has confirmed Sept. 9 as the official date. CNET has a fun roundup of other rumors before the launch.

Obviously, New York City is the place to be in September. First, the city hosts The Clinton Global Initiative Annual Meeting from Sept. 21-24. In addition to the Clintons, other headlined speakers include President Barack Obama, Mary Barra, CEO of GM, and Jack Ma, Executive Chairman of Alibaba. Second, New York City plays host to 80 events, activities and high-profile meetings related to the climate topic. Officially known as Climate Week NYC (Sept. 22-28), the main event of the week is the UN Climate Summit where world leaders convene "to galvanize and catalyze climate action."

Other important, if not quirky, events to take place in the month of September include Teachers Day (Sept. 5), National Cheeseburger Day (Sept. 18), First Day of Autumn (Sept. 23), and World Coffee Day (Sept. 29). You can get a complete listing here.

Can Advertising and Mass Communication Be Transformative?