By now you’ve probably noticed we are huge fans of those who use their social media powers for good (and entertainment and promotion). Every day we counsel our clients on the power of social media and recently some news stories have been backing us up. (See colleague Stephen Kennedy’s post on TODAY show host Ann Curry connecting a U.S. family with daughter visiting Japan during the quake earlier this month). Earlier this week, Conan O’Brien ran three commercials on his show from one of America’s favorite brands, Kraft Mac & Cheese. In a 24-hour campaign creation, Kraft really proved it is listening to its “followers” (quite literally). The inspiration for the three hilarious commercials came directly from consumer tweets. 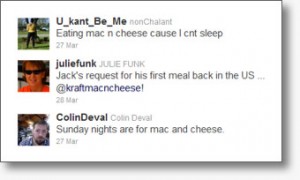 In a tight turnaround, Kraft asked permission (via Twitter) to turn three tweets into commercials. Not only did this have three brand-loyalists anticipating the finished product (and tweeting about it) but it also sent a message to the brand’s larger following – we’re out there, listening to you and value your use of the brand and your promotion of it. We’ve heard plenty of the citizen journalists and this runs parallel to the idea. Kraft is turning its consumers into citizen brand managers!

Another interesting point to mention from this campaign is the distribution Kraft used to get the commercials out there. When proposing an idea to use Facebook, YouTube or any other social media outlet as a distribution, we tend to get a lot of flak from clients. Even though social media has been heating up for the past couple years, still not everyone embraces its promotional power.

Lesson learned from Kraft’s recent stunt however is that Facebook can be a direct avenue to higher-tier press. While the commercials were distributed via the popular social networking site first, several publications (and Conan of course) picked up the story soon after and before no time, the commercials made their way to the big screen (without the expense of a media buy!).

It’s no surprise that the 24-hour start-to-finish campaign comes from dare-devil agency Crispin Porter + Bogusky (former agency for Groupon and Burger King). Mashable reported at the start and finish of the project, quoting senior brand managers at Kraft as to whether this will be an ongoing effort for Kraft marketing or not.