Christmas has come and gone. All those high-tech gadgets and doodads have been bought, opened and… what’s that? Broken or with missing parts? Gasp! What now? What do you do? Do you cry? Weep uncontrollably, curled up in the fetal position? Do you call 9-1-1? Or do you do what most normal people do and bravely attempt to dial a hopefully knowledgeable and friendly customer service representative? You’re not alone. As a result, many of us are all too familiar with the scenes that play out in Discover’s “Peggy” credit card commercials. You know the ones. You call up with a question and find yourself talking in circles without coming to a resolution. But who’s resolution is the priority here, yours, or the company you’re calling?

Has anyone else noticed how the new millennium has seemingly brought about the downfall of customer service? I’ve certainly noticed. I myself had issues comparable to that of Jeff Jarvis. Jarvis purchased what would be a faulty laptop from Dell, and despite having a four-year coverage plan, getting his concerns addressed and problems solved was anything other than blissful. During a time when blog readership was finally reaching relevance, Jarvis wrote a blog post that resonated across an empathetic Web community to such a degree that even corporate giant Dell was brought to its knees (socially speaking, of course). As a result, Dell restructured its online presence to what it is today, and made a strong, vocal push to listen to their customers in order to avoid the possibility of another Dell Hell incident.

Before Jarvis, Dell and other companies didn’t necessarily need to listen to a single complaint (due to a lack of a social community, ready and willing to share their experiences). Let me pose a question: have things truly improved, or has a new layer of smoke and mirrors been installed to give the appearance of change?

Did anyone order from BestBuy.com before Christmas in expectation of receiving their purchase before the jolly fat man descended down their chimney? Did you receive your order? Apparently many people didn’t. This obviously irritated many customers. Even more fascinating are the comments left on the article linked above. Go on, brave souls, and peruse the Holiday 2011 forum to see all the holiday cheer from Best Buy. A quick Google search, however, will show that this is just a drop in the bucket that make up Best Buy’s corporate concerns. Awkward, I know. But at least President Obama had a completely spontaneous photo op there before Christmas! And on a side note, I don’t think I was the only one to find their Christmas TV ad campaign amusing, so kudos to them for that. 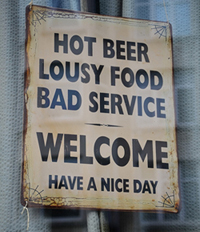 Now, I’ll bite the bullet. Corporate America: I get it. I understand that there are times when you may not receive the expected quantity of products you’ve sold; I know that due to the nature of the season, orders may not ship on time; I get that it’s less expensive to keep a customer support hive in another country; and I know that a lot of the drama you put up with may not necessarily be in your control. These things, however, aren’t an excuse for slashing a customer’s expectations by punishing them for making a purchase from your company. Surviving in corporate America is tricky, but won’t it be easier by keeping your promises to those who support you? Sure, Bill the blogger made waves because of his corporate account with Dell, but how much should a regular customer endure before their issues are addressed? Is a firestorm more important to extinguish than a fire-drizzle, and what defines an order or customer’s priority?

Dell and Best Buy are just a few of the many mainstream companies providing sketchy customer support to a hungry and increasingly social community. In today’s online market, a buyer needs to beware. Want that hot product? Think ahead. Ordering last minute? Perhaps it’s not best to expect a best-case scenario. Want something custom? Good luck! Next holiday season, you’ll find this guy in virtual line at Amazon. Viva Jeff Bezos!