CJP Editorial: Tuesday's earthquake made quite a shake up and down the East Coast–from Virginia all the way up to Toronto.  Most people were not sure what to make of the rumblings, but it did seem to cause quite a stir in SMS traffic near the hot zones. See what CJP client Sybase 365 has to say:

The SMS traffic dropped in the first 2 minutes, immediately following the times that the earthquake was felt, as everyone had their "What was THAT??" moments. Then texting began in earnest. In the New York City area, SMS traffic quickly doubled in the minutes following the quake. There was a slight drop in traffic rates as mobile carriers became fully congested, but SMS traffic continued to grow and it almost tripled within 20 minutes vs. a "normal" day, when the traffic rates are relatively constant.

In Washington DC, we saw similar patterns, but the volume only doubled from normal, but stayed that way throughout the next 30-40 minutes. It took several hours before it dropped back to normal levels in both metro areas. 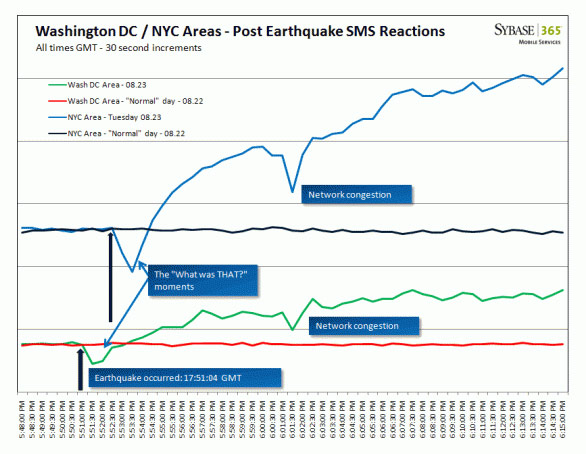 An interesting feature of the graphic shows that it took just under 2 minutes for the quake reaction to begin in NYC vs. the Washington DC area. The 2PM-3PM hour was a record in terms of SMS volume for that same hour on any day prior.

Nationally, the traffic was somewhat diluted by most areas of the country that were not affected, but we still saw a noticeable increase in SMS traffic, immediately following the quake.  The higher traffic in NYC/Washington DC areas accounted for most of the volume jumps. The "What Was THAT" moments were diluted, but very evident in the National graphic, as was the short drop in traffic rates, several minutes after the quake as mobile network infrastructure processed the rush of messages. Even though the mobile networks had voice saturation that also lead to some messages not going through, for the most part SMS worked very well–even in areas where voice could not function. 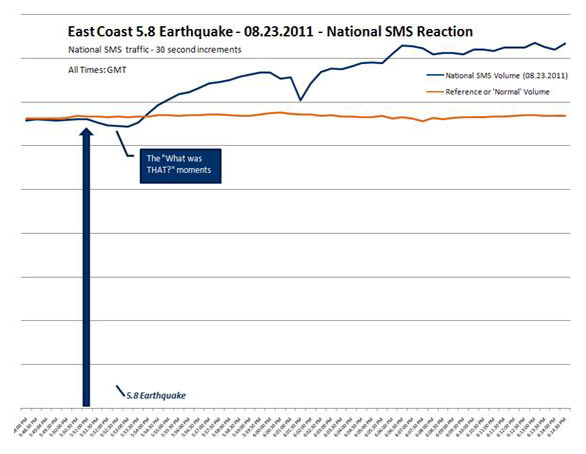 Bill Dudley is Group Director of Operator Services Products at Sybase 365.* Bill can be followed on Twitter at @wdudley2009

Cutting to the Chase: Little Stories with Big Personalities

Is Uber Driving Off a Cliff?

High-profile scandals have beset the transportation industry in recent years, but compared to Uber's, even the United fiasco looks like a gentle misunderstanding. John Hyatt explores the tech company's recent crises from a PR lens.