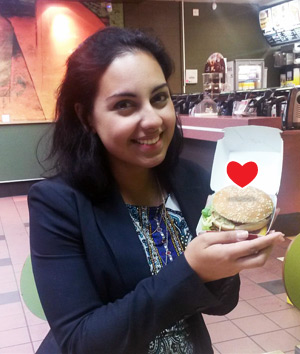 The cheeseburger. Along with apple pie, it has, perhaps more than any other foodstuff, become synonymous with not just America, but what it means to be an American. With "National Cheeseburger Day" upon us today, it is time to refresh our memories as to the journey taken by this patriotic platter.

Its origins are disputed (there are three towns across the US claiming to be the birthplace of this bovine delicacy) yet the symbolism was, initially, the same. It is a dish for the nation of plenty. It became a symbol of American virility, a testament to its enduring commitment to a meritocratic, no nonsense society. Read early British press reports on the opening of the first McDonald's and the responses were confused, even somewhat scandalised - indeed one diner, a veteran, is said to have remarked: 'These Yanks never change - too large and no taste.' That diner was my Grandfather.

However, in 2004, 'Super Size Me' was released. Suddenly, almost overnight, the humble cheeseburger went from being a cultural achievement to a byword for gluttony. No longer did it highlight America's virtues, but rather came to symbolise its decadence and hedonism.  Europeans guffawed into their foie gras fondant at American indulgence.

Today this is no longer the case. In what must stand out as one of the best, yet least recognised, combined PR, marketing and advertising campaigns in history the "now" much maligned cheeseburger was rebranded and repositioned away from its humble roots and presented as an dish: organic, clean - even trendy.

Full-page adverts on calorie contents were taken out. Articles were published detailing the benefits of the 'new' fresh, organic ingredients. Salads took pride of place in promotion materials. My school - an incredibly isolated place in the middle of nowhere - received a letter countering the 'idea' that cheeseburgers were bad for you. Nor was this a short-term push, but rather the work of half a decade or more.

In this way the entire emphasis shifted. No longer was it a convenient food, grabbed on the run. Instead, it was all about customer choice - 'build your own' and 'have it your way' became the new mantra. Shake Shack and Five Guys sprung up to compete with McDonald's and Burger King. It was, it was contended, possible to have your cheeseburger and eat it too.

Truthfully though little changed, and this is perhaps the true genius of long-term vision of the campaign. Ten years since 'Super Size Me,' more burgers are eaten than ever and now not only is it a quick-fix, but is also a gourmet dish. You cannot help but admire the beauty in the irony! Today is National Cheeseburger Day - a day which, almost uniquely, transcends both the Atlantic and the Beltway (no small feat!). So enjoy yourself, indulge a little and God Bless America.