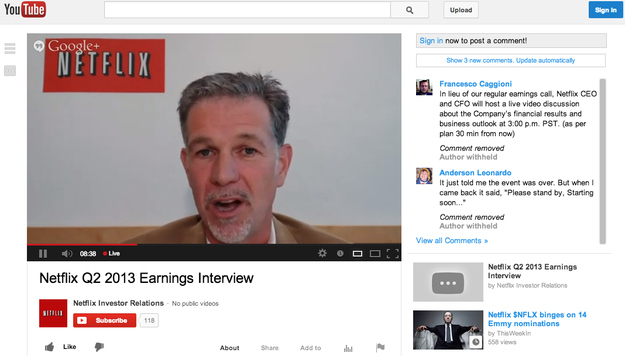 Recently, usually staid earnings calls have begun turning into full on multimedia events; specifically, Yahoo! and Netflix both recently live-streamed their quarterly earnings presentations, as opposed to holding the traditional teleconference with analysts.

Yahoo! was the first to make their silver screen earnings debut last week with CEO Marissa Mayer and CFO Ken Goldman presenting a newscast style presentation from Yahoo’s California headquarters. While the live streaming element was a new twist, Yahoo! retained the traditional Q&A with sell-side analysts, some of whom stuck with the traditional call in format as opposed to actually tuning in to the webcast. That said, some that did call in joked about being able to read “expressions on [the executives’] faces” and The Wall Street Journal quoted Douglas Skinner, a professor at the University of Chicago's Booth School of Business who has studied earnings presentations as saying that he’s “sure people will be analyzing facial expressions and body language to draw signals about the company and about the credibility of what management is saying.”

While Yahoo!’s presentation was polished and demonstrated relatively high production quality, lackluster results and some, ahem, other news*, were the dominant stories coming out of the announcement.

Netflix was the next to take a bow with what one could say was a markedly more unconventional method early this week. Whereas Yahoo! opted for a network news style broadcast, Netflix instead posted a YouTube video, filmed on laptops' internal cameras, of CEO Reed Hastings, CFO David Wells and chief Content Officer Ted Sarandos. Also, whereas calls usually feature questions from multiple analysts, as the Yahoo! webcast did, the Netflix call was moderated by CNBC reporter Julia Boorstin and an analyst. The two posed questions to management that were culled from the emails and tweets of a variety of stakeholders, including institutional and retail shareholders, sell-side analysts and even other media outlets. This format notably irked some of those sell-side analysts, who didn’t appreciate having their questions filtered by a third party. To Netflix’s credit, they opened the call by responding to these criticisms in a question posed by Boorstin, to which CEO Hastings that they should “should process that after the interview and see if it’s productive and useful for investors, and see what they think.”

In another unconventional (if less splashy) move Zillow, the real estate website operator, announced last week that it would be accepting questions for its traditional analyst call via the company’s Facebook page (using the hasthag #ZEarnings) and Twitter. The company will be hosting a traditional call on Tuesday, August 6, after the market closes, which will include some selected questions that were submitted via social media. Tune in to that call here to see how it goes.

What do you think about this move to multimedia earnings announcements? Is it a merely a gimmick or the future of earnings communications, if the latter, are there ways it can be improved?

*Arguably the bigger story around Yahoo!’s earnings was its repurchase of 40 million shares of its common stock from investor and (now former) board member Dan Loeb’s Third Point. This move was decried in some corners for reasons ranging from it being to detrimental to other shareholders to it possibly amounting to insider trading. The former point could be debated but on the latter point, no, this is most definitely not insider trading.