The UnPRedicted Merger of Equals 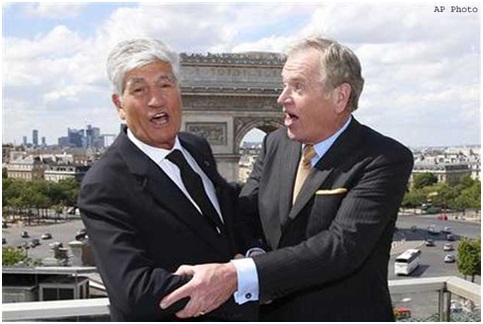 Omnicom* and Publicis recently announced they intend to combine in a “merger of equals” that stands to change the face of the advertising, marketing and communications industries (though some say PR may be an “afterthought” in this deal, despite it creating the largest PR entity in the world). The announcement caught industry spectators by surprise and the combined entity, which will be known as Omnicom Publicis group, will usurp the title of the world’s largest advertising holding company (it will have almost $23 billion in revenues and a market capitalization of roughly $35 billion!) from current incumbent WPP.

The deal was notably confirmed via a well orchestrated press conference, which produced some great photo opportunities.

While analysts were fairly upbeat, in some cases this was more due to the benefits that would accrue to the broader industry, including some of the new would-be firm’s rivals.

However, that is not because of a lack of the executives extolling the benefits of the deal for shareholders: they pointed to $500 million in eventual synergies and the complimentary capabilities and geographical exposures the two firms offer one another (for more on that, see the investor presentation). Also, while they said that while the deal is not being done for the sake of greater scale, both they and others have noted it will afford the company an edge in some respects, especially when it comes to media buying and negotiating fees with clients.

Though the deal appears to be a positive for the two companies, it is not without its challenges, one example being the potential loss of clients due to conflicts. Many think the client conflict issue won’t pose too much of a roadblock, and I tend to agree, but there could still be an opportunity for smaller firms to add some incremental business.

The bigger potential issue is the potential of running afoul of antitrust regulators. On this point, I believe that while the deal will certainly undergo a lengthy and thorough review process, competitive concerns will not end up scuttling the deal, although some divestitures may be required. That said, as with many horizontal mergers, how regulators define the relevant market will likely be a key determination.

It is also worth noting that there could be cultural issues at play, especially in maintaining the true “equality” of the merger, an issue which French regulators may find of great concern.

Another point brought up by commentators is that this mega-deal could put the smaller holding companies in play as merger targets (namely Interpublic Group - who was rumored to be the subject of a takeover bid by Publicis last year - and Havas). However, one bar to either of these companies being acquired is that while Omnicom and Publicis were able to structure this as a merger of equals, a deal for either of these smaller players would probably require a sizable premium (for example when Japanese holding company Dentsu bought U.K. media buying company Aegis last year they paid a 48% premium). Accordingly, while another holding company acquisition is certainly possible, further short term consolidation, should it occur, may likely be in the form of smaller bolt-on acquisitions by the remaining holding companies.

While this deal is undoubtedly a game-changer, when it comes to getting this deal done, the game is far from over; and how exactly the game will change is far from certain.