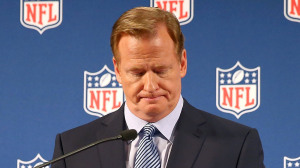 By now, most of us are familiar with the seemingly endless rash of deplorable public embarrassments facing the NFL.

Adrian Peterson, once upon a time viewed as squeaky clean as Derek Jeter or Michael J. Fox, turns out to have allegedly physically harmed a child. Then, he makes matters even worse for himself and the league by admitting to smoking pot while out on bail, breaking the rules of both common sense and the law.

Ravens running back Ray Rice punches out his then fiancée in a hotel elevator, shining a light on domestic violence across the league. Carolina Panther Greg Hardy makes headlines for assaulting his former girlfriend and threatening her life. The league then fails miserably in its attempt to manage the media and public reaction to its response to the domestic violence situation, putting NFL football in the news for reasons that have nothing to do with the play on the field.

The list of criminal behaviors on display this season among NFL players, owners and executives for things such as DWI, domestic violence, theft, murder, drug abuse and general abuse of power goes on and on. And, let us not forget all the protests and negative headlines regarding the way Daniel Snyder, owner of the Washington Redskins, has refused to change the name and logo of the team to something that doesn't offend millions of Americans, not to mention fans of the team and the NFL.

Piling on to the problems facing the NFL, the league has again found itself in the crosshairs of the media for recently stating in court documents that it expects nearly one-third of former players to develop long-term cognitive problems. Injuries have always been an issue in pro football, but what other industry could get away with one in three of its employees winding up with brain damage due to their work on the job?

And, beyond the long term damage caused by injuries, star players are getting seriously injured at an alarming rate this season. Some of the biggest fan favorites and fantasy football studs have been lost for the season or at least for several weeks such as Victor Cruz, Calvin Johnson and Knowshon Moreno. Sports highlight shows can't get enough of reporting on injured fantasy stars, putting injuries more front and center in the news media.

Given all this negative news, it baffles me that an organization with as much power and funding as the NFL cannot better manage its public reputation. The latest example of this, and the straw that broke the camel's back for me, is the sad and depressing half time show during Monday Night Football on October 13 between the Rams and Forty Niners.

After an NFL weekend that saw many big plays and upsets, the ESPN broadcast during half time of the Monday Night Game did not at focus at all on the good that happened in football over the weekend. Not much was said about the amazing game between the Bengals and Panthers that ended in a 37-37 tie. What about the Cowboys shocking everyone with a commanding win against Seattle on the road? Barely a peep. Instead, the central focus of the halftime report was the litany of major injuries and disciplinary actions across the league. Following minutes of video segments highlighting various injuries and misdeeds of the week, ESPN cut to yet another commercial. What an unusual way to market the sport, not to mention attract parents to sign their kids up for Pop Warner football.

Instead, why not showcase what is good about the sport? Why, after weeks and weeks of negative publicity, showcase once again all that is bad about the game? I understand that it was ESPN that broadcasted the halftime show on Monday Night Football and not the NFL. However, ESPN, like all NFL broadcast partners, has an interest in attracting fans and viewers to NFL games. So, why then would they choose to shine a spotlight on the ugliest aspects of the game? To me, this is like a public company opening a quarterly earnings conference call by spotlighting all the areas of its business that lost money during the quarter.

I would assume the NFL has a large and well-resourced communications and PR department. I assume they are skilled at telling positive stories that attract people to the game. However, it seems they have no influence over the way its broadcast partners cover the sport. Likewise, they don't seem to be particularly adept at responding decisively or competently in the face of public criticism.

As long as the Jets have even the slightest of chances of finishing the season with a winning record, I will continue to follow the NFL, watch its games on television and obsess over my fantasy football team. But, as someone that loves the game, I am very concerned about all the bad behavior across the league and the inability of the league to manage its reputation and that of the sport, its fans, its players and coaches, and its corporate sponsors.

Time is running out on my hope of a winning season for my beloved Jets. My patience, and I assume the patience of millions of American football fans, with the league and how it is handling its reputation and that of the game, is running out too.