This is a real thing that happened on Friday. 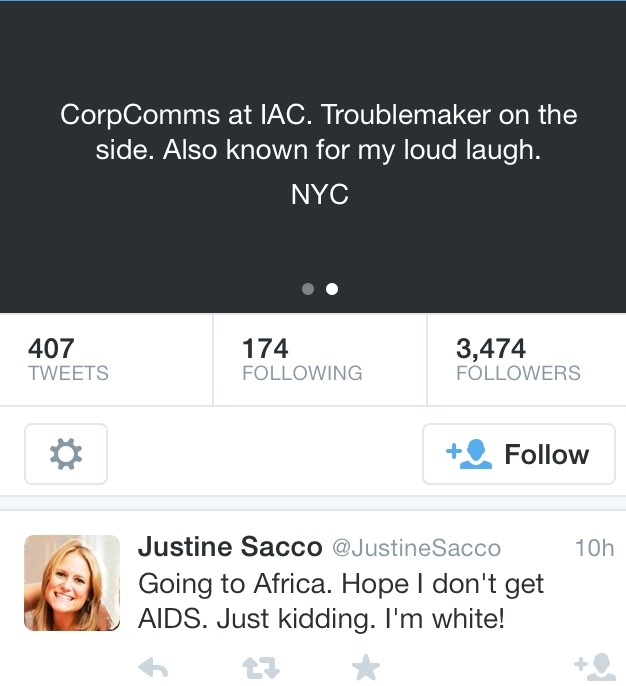 At 10am ET as her plane was taking off, Justine Sacco, (then) Senior Director of Corporate Communications for IAC - the $6B publicly traded digital media company run by Barry Diller with high-profile holdings like Match.com, Tinder, Vimeo, OK Cupid and College Humor - publicly tweeted "Going to Africa. Hope I don't get AIDS. Just kidding. I'm white!" - Before turning her phone off for the duration of her 10 hour and 46 minute flight to Africa.

Justine Sacco's career suicide unfolded in its entirety over the course of 10 hours and 46 minutes while she was on that plane.

Soon after she hit send (at around 10am), Valleywag writer and former Sacco Twitter follower Sam Biddle saw the Tweet and posted this story at 1:30pm.  Hundreds of media outlets picked up on Biddle’s post including The New York Times, New York Daily News, Buzzfeed, Huffington Post, Adweek, Business Insider, Mashable and many, many more. Hundreds crested over a thousand once IAC finally realized what was going on two hours (!) later and released a statement (presumably written by one of Sacco’s colleagues...awkward). By the time she arrived in Capetown, South Africa, her offending Tweet had sat atop her profile as the Internet’s punching bag for close to 12 hours and #HasJustineLandedYet was trending worldwide.

Regardless of your personal threshold for offensive humor or your views on free speech, there are smarter moves to make when your bio starts with "CorpComms at IAC."  But I'm not here to crucify Justine Sacco. The Internet has done a great job of that already.  Frankly, I'm more interested in how nobody at IAC seems to have noticed their front line communicator gleefully Tweeting a litany of remarks ranging from questionable to inappropriate to outright offensive for well-over a year.

I could almost understand the miss if Sacco were Tweeting anonymously or from a second account with another name; but this is your LEAD PR PERSON. She is THE person the media follows for official IAC company information. Before her Twitter account was deleted she'd Tweeted a C-level new hire announcement immediately before a prickly rant about Germans with poor personal hygiene. Yes, her absence of judgment is well-noted but really? No one else caught that?

It's not like her bosses or anyone at IAC didn't have multiple opportunities to catch her.  Her public profile provided Buzzfeed enough questionable material spanning 3 years to choose "16 Tweets Justine Sacco Regrets." You read them here.

Seriously, are there no IAC execs on Twitter? Did they just not follow their now former Head of Corporate Comms Justine Sacco?  Was there ever a closed door conversation to discuss how to handle a senior PR exec who sandwiches Tweets about earnings with jokes about autistic children? Nobody caught that one either, huh?  It was right there on the internet for over a year.  It's no wonder Sacco had a history of Tweeting things unbecoming her position at IAC because nobody seems to have noticed or cared before Friday.

This is not another case of a big company 'not getting' social media.  This is a rare case of a company, a digital media company no less, barely even acknowledging social media is a real thing that exists.