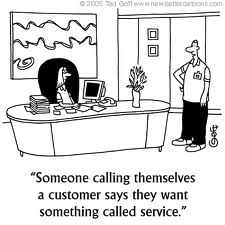 Three times this month, there’s been no hot water for the showers at my gym. Especially for swimmers or people going right to work or class, that’s a big problem. The last time it happened, a group of fed-up members barraged an employee with angry questions. What happened next is a cautionary tale for any company that thinks PR or advertising can overcome bad business practices.

Pressed for answers, the employee said the problem was a chronically malfunctioning water heater. But some members had already come up with a different reason. They believe the club shuts off the hot water an hour or so before closing to save money. I don’t go regularly enough to spot patterns so I don’t know if that’s true or not.

But another pattern did emerge as the employee tried to explain away the litany of complaints that followed, including non-functioning fitness equipment, a scale that broke nine months ago and hasn’t been replaced (a very big deal for gym-goers) and the water fountain, which has sat dry for more than a year.

So what does all of this have to do with PR? It’s simple. This same gym chain spends a fortune on national and local advertising to get people to join. They are constantly selling, even internally. Every few minutes, the club’s P.A. system spouts some drivel about its commitment to members. At the same time, people who have faced one too many cold showers have taken their business elsewhere.

Does customer churn matter? Absolutely. A recent New York Times article focused on Johnson & Johnson’s recent history of recalls – some 288 million drug products in 2010, according to the FDA, with an additional 43 million recalled so far this year.

The article noted that once items have been taken off shelves, J&J loses the immediate sale. It also runs the risk that people will shift to cheaper store brands, having lost their faith that the name brand is a guarantee of quality. The lost dollars add up. In the third quarter of 2010, J&J said sales of over-the-counter medicines and nutritional products declined about 40 percent from the same period in 2009. Overall U.S. consumer sales dropped from $1.7 billion to $1.3 billion.

With every recall, the company also loses one of its most powerful assets – its reputation for quality and trustworthiness. Maybe J&J will earn back that trust eventually. Or maybe it’s squandered more than a century of brand building. (It doesn’t help that many of the recalled products were for children.)

Companies make mistakes. But there’s a big difference between honest mistakes and corporate policies that cut corners at every turn, and management that thinks no one will notice. They will.

So whether a company is running sub-standard factories or treating its customers as expendable, the result is the same and the lesson is clear: Run your business in a way that respects your customers. PR can go a long way toward building a brand for quality organizations. What it can’t do is make up for the shortcomings of a company that is poorly run and lacks integrity.

Mark LaVoie discusses what corporations can learn when it comes to content from the New York Times' 2020 Vision.