What Warren Buffett's Take on Women and Work Means for PR 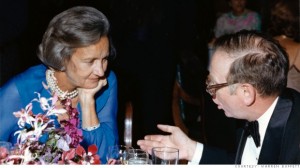 Warren Buffett with the late Katharine Graham of the Washington Post at his 50th-birthday party in 1980. Image courtesy: Warren Buffett as seen on Fortune

The most recent issue of FORTUNE features an essay by Warren Buffett entitled, “Warren Buffett is bullish ... on women.”* In it, Mr. Buffett contributes his own thoughts to the recent dialogue taking place around women and work in the U.S., characterizing the unfortunate fact that barriers still remain.

Despite our track record as a nation, Mr. Buffett writes, “America has forged this success while utilizing, in large part, only half of the country's talent.”

Ultimately, Mr. Buffett’s FORTUNE essay issues a call to action not only to the men who continue to lead the majority of our corporations and occupy nearly all of the seats on our corporate boards, but also to those men who manage employees at any level.

No manager operates his or her plants at 80% efficiency when steps could be taken that would increase output. And no CEO wants male employees to be underutilized when improved training or working conditions would boost productivity. So take it one step further: If obvious benefits flow from helping the male component of the workforce achieve its potential, why in the world wouldn't you want to include its counterpart?”

While I don’t wholly agree with Mr. Buffett’s assessment on certain points (I’m sure he won’t lose any sleep over that), I did find his argument to be compelling. It also made me take a moment to look at the public relations profession in light of the argument that embracing the ascension of women to executive roles and directorships within companies, in addition to providing greater opportunity, mentorship and promotion of women through all levels of business makes business sense.

Take a look at the Holmes’ Reports’ Global Rankings of PR Agencies for 2012 and among them you’ll see two notable characteristics:

#1 – All of the top 10 biggest agencies have majority male leadership and boards. All 10 have male CEOs.

The vast majority of public relations professionals are women. While the exact percentage is disputed, PRSA has estimated that around 73% of its membership is women. Let’s assume a ±10% margin of error, just to play it safe. That would mean women comprise around 63% of PR.

Around two-thirds of the employees who power the engines of the world’s largest PR agencies are women, but you’d never be able to tell from these firms’ leadership. While the top 10 agencies brought in an estimated $4.1 billion in fees for 2011, half of these agencies topped out at 4% growth. There is without question room for improvement, particularly when sector up and comers are growing at rates as high as 49.4%, according to O’Dwyers.

As agencies try to remain competitive, we as a profession would be hard pressed not to take Mr. Buffett’s advice. In closing, to quote the FORTUNE essay, “The closer that America comes to fully employing the talents of all its citizens, the greater its output of goods and services will be. We've seen what can be accomplished when we use 50% of our human capacity. If you visualize what 100% can do, you'll join me as an unbridled optimist about America's future.”