Need to find a video online? How about the classic Keyboard Cat video and its April Fool’s Day equivalent Flugelhorn Feline (as seen to the right)? Or maybe you want to watch Kirstie Alley falling down in Dancing With the Stars repeatedly? Where do you go? YouTube, of course — and thanks to its innate social format, other people know that too.

It seems as if YouTube has been entertaining the savvy, comedy-starved masses for far more than the six years it’s been in existence, and only five of those years have been under Google ownership. During its relatively short life-cycle, the Internet has seen a golden age of rich video-based media, spawning many clones and alternatives along the way.  These clones, of course, only help to further define the success story that is YouTube, where anyone can become a video producer and even become an online celebrity (mad props to you, little boy who had his finger bitten by the vicious baby Charlie). All of that is great and all, but where’s the innovation? Where can YouTube possibly go to advance its brand and online video? How about refocusing its content into channels and offering live, streaming video feeds? Yeah, that’s pretty huge. 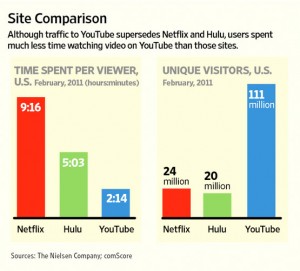 Chart as seen on the Wall Street Journal

Netflix, are you nervous? You should be. As discussed in this Wall Street Journal article, YouTube is looking to compete directly with broadcast and cable television (right in your living rooms!) by investing as much as $100 million toward the creation of original, low-cost content. Considering how many unique visitors YouTube has, having eyes to watch this content won’t be much of a challenge. This initial investment will, one might imagine, simply be a starting point. And why not? Creating original content costs quite a bit less than buying licenses to existing content, after all. Add in all the viral potential YouTube content clearly has, and popularity of imaginative and genuinely good content will be rewarded.

Another intriguing aspect of YouTube’s forthcoming upgrade is the potential talent it has been in talks with via meetings with several Hollywood talent agencies. The goal of these meetings is to have clients of said agencies create and populate their own YouTube channels. While the ideal results might be with film companies, directors or producers as opposed to individual actors or actresses, plenty of worthwhile content will surely be created. How quickly and easily this content will be placed online is still a gray area, however. If it's as simple as it is for a layman like myself, then one would think content has the opportunity to not only be relevant, but inherently fast to share.

Did you know Netflix has an app currently available on iPhone/iPad devices, as well as many popular Blu Ray players, video game systems, etc? Netflix account holders can stream television shows and movies directly from its fairly vast selection. YouTube has its own app on these devices and more. Yeah, I see some intense potential there with that much accessibility. Sure, software programmers may need to tweak the software slightly to incorporate new capabilities, but somehow I don't see that as being a huge issue for a company owned by Google. For more details, check out yet another Wall Street Journal article.

What it comes down to is this: YouTube dominates the online video realm with its over 100 million unique visitors. By adding more organization and original streaming content to its already strong service, YouTube's future will provide an almost infinite number of possibilities, both for new revenue and advertising opportunities. Is all the aforementioned not enough? Don't worry — the company is also in the process of trying to make popular movies and television shows available as well. Can YouTube become something more than a home for viral videos? I think so.

In conclusion, my primary hope is that Keyboard Cat gets its own sitcom. Fingers crossed.

What's In a Name? Controversal Headlines Can Add To Story Longevity and Reach