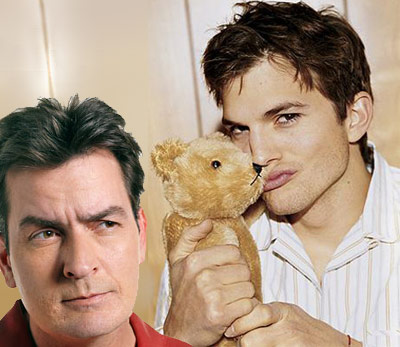 Have you been able to watch the new season of Two and Half Men? I’m personally proud to not be part of the millions who have, though I’ll cynically admit to enjoy if/when the show enjoys an epic collapse in ratings. But that’s beside the point. Charlie Sheen is out, and Ashton Kutcher is in. Hurray for change!... right? Right. We could spend all day (or at least five minutes) discussing if Ashton is an effective replacement for Charlie, America’s most recent mocked golden boy, but I want to look at the bigger picture here. I want to take a closer look at Ashton’s social savvy, and even his social stumbles.

Ashton comes from humble beginnings. I know this, because I’ve read through his Wikipedia page, so naturally that makes me a biopic expert. Despite family-based hardships and a slew of lousy personal decisions, he has turned into someone with varied significant successes. Did you know he  participated in a modeling competition but lost to Josh Duhamel? That really doesn’t matter, as Ashton has seemed to have far more professional success—but I suppose that’s simply up to debate. Despite his loss to Duhamel, Ashton continued modeling, which eventually led him to move to Los Angeles, where he successfully auditioned for That 70’s Show.

Perhaps it was the success of the show that further propelled him to the multiple, yet ironically similar, movies that he’d act in. I admit that my favorite, by far, is The Butterfly Effect. By far, I mean I didn’t like the others. Having even been the focal point of most Nikon commercials for the past several  years, one can’t question his professional perseverance across a multitude of mediums. Perhaps the biggest blessing and curse hanging over Ashton’s head is the success of the self-produced and self-starring show, Punk’d. I’ll admit, I found the show amusing. But from that show’s success came what some (read: I) may call one of the single most hot-messiest ego trips of television drivel known to man. Examples of his follows-ups are Beauty and the Geek and The Real Wedding Crashers. And perhaps these examples and more weren’t Ashton’s fault, but instead the television executives that green lit all of these cockamamie ideas simply because his name was attached to them. But hey, despite the fact that I may mock his awful shows, the fact still remains that they do indeed get produced, and will continue to do so. At least he lent his voice to the lesser-known Robot Chicken, and for that, I salute him. 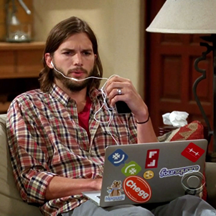 As noted above, we all know that Ashton is on Two and a Half Men (whoa, we’re full circle now). I’m glad, as he surely needed the money. But all his poverty concerns aside, I’d like to focus on a certain laptop his character, Schmidt, used during a recent broadcast. Apparently, as the cameras focused on him, the back of his laptop displayed a series of stickers on it from various companies, at least one of which is an invested interest of Ashton. So hey, free advertising for you, FourSquare! And perhaps Ashton's company, Katalyst (a technology and social media company), has interest in the other companies’ stickers? When CBS reps found out about these placements, they were understandably peeved. What did Ashton have to say about this?

"I don't know exactly why," Kutcher continued, reverting back to that which he does best - playing pretty and dumb. ~TwinCities.com

So, we know Ashton is a recognizable icon throughout the world with no end in sight to his acting career, for better or worse. He’s an accomplished and well-versed social media and tech guru in his own right, albeit out from self-practice and proclamation (his planned major was biochemical engineering). Who can forget his epic (okay, maybe the wrong word) victory over the dastardly CNN Twitter account, when @aplusk was the first to achieve one million followers? Yeah, I don’t care either. Clearly I digress. Anyway, love him or hate him, we all know him, and he's here to stay. Fin.

After Scandal, Will SAC's New Name Revive its Brand?