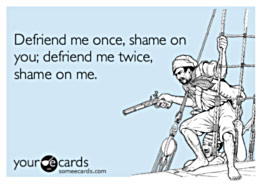 Even if you have thick skin, the realization that someone has defriended you on Facebook can leave your ego pretty bruised. If said “defriender” isn’t someone who you have gotten in a recent fight with (like a friend or an ex) and isn’t someone who is trying to hide content from you (such as a daughter, son or younger relative), figuring out why you were defriended can be quite a puzzle. You can also rule out the possibility that it was an accident. The act of defriending is a deliberate move, as you must literally go to the person’s profile page and click “Remove as Friend” to do so. So what, exactly, is defriender’s problem with you?

Perhaps defriender’s issue isn’t with you, but with your social media communication style. Do your statuses inform the Facebook world of your every waking move, including the fact that you had Cinnamon Toast Crunch for breakfast? Are you clogging your friend’s newsfeeds with relationship updates because you and your significant other “complicated” Monday, “open” Tuesday and “single” by Friday? Do your 35 Facebook albums solely consist of pictures of your cat? Then you’re guilty of meaningless social media over-sharing; who can blame defriender for wanting to eliminate you from his or her newsfeed?

Apparently, the motives behind why someone might defriend you on Facebook resemble the reasons why someone might unlike, unfollow, unsubscribe or otherwise “break up” with your brand online. According to a recent article by PR Daily, the main reasons why people “break up” with brands is because posts either become too frequent, or content becomes too repetitive. According to a similar New York Times article by Ciara Byrne, a new study by Exact Market and CoTweet reveals 90 percent of consumers say that they have “broken up” with a brand via Facebook, email or Twitter. In order to avoid losing your fans and followers, treat your social media relationship with your consumer like you would treat a real relationship:

“A social relationship with a brand begins when you become a subscriber, fan, follower or consumer of the company’s products. As in any new romantic relationship, how it develops depends on whether the brand’s social media persona veers towards indifference, repetitiveness or just plain desperation,” says Byrne.

As with all relationships, it takes effort to maintain a connection with your consumer. In order to “keep the spark alive” you must be have something to give: whether it be special offers or discounts, contests, fresh and interesting content or answers to consumer questions. All posts should be concise and focused, while also providing something original and unexpected.

However, the method for creating compelling content is different for each social media platform. Facebook can often be confusing for marketers, because according to the Exact Market and CoTweet study, when a consumer chooses to “like” a brand, it does not necessarily mean they want to be sent marketing materials. Since frequency is the main reason why fans disengage on Facebook, the study advises marketers to limit posts on Facebook to avoid drowning out social interactions. If you’re going to post something on Facebook, make sure it will offer valuable information to your fans and followers.

Twitter posts, on the other hand, must be somewhat frequent so that your brand stays on your consumer’s radar. But how do you gauge exactly how often you should tweet? CJP’s own Twitter expert, Jake Daubenspeck, advises social media marketers to set a “qualitative quota” for content:

“Don’t approach Twitter as an exercise in posting exactly fifteen (or twenty, or thirty, or however many) tweets each and every week. Instead, visualize and plan how you want to show (not just tell) the story of your business. Structure your tweets to meet these qualitative parameters. Ultimately, social media marketers should tweet as often as they have something worthwhile to say.”

By focusing on the quality, rather than the quantity of the tweets, social media marketers can avoid over- or- under-sharing. Another way to build a follower base, according to Jake, is to devote a percentage of your activity to relationship-building tweets (ex. Tweeting a question to an expert on a specific topic). This way, you’ll be putting out the same quantity of tweets, while fostering new relationships that create a win-win for both your brand and your followers.

Twitter is also tricky because you only have 140 characters to cleverly grab the attention of your target audience. For this problem, Jake advises marketers to consider writing about a diverse range of topics, instead of only posting about the exact, finite market in which they operate. For instance, at CJP, we keep our Twitter posts interesting by hosting a weekly Twitter spotlight called “#TopicTuesday” (which you can check out at @CJPCom). This day-long campaign gives us the opportunity to engage our followers in a unique way because content is arranged around specific topics of interest that we, as a financial services PR firm, would not post about on a daily basis. For example, recent topics have included #BizLunch and #ConferenceTips. Specialized content of this nature resonates with our followers when it’s shared in a manner that is non-invasive (infrequent) and timely (we’re in the thick of conference season right now).

The truth is: most relationships eventually come to an end. Not everyone is going to “like” what your brand has to say, but you can reduce the chances that people will choose to disengage with your company. Just as you’re likely to be defriended for repetitive over sharing in your personal Facebook page, it’s probable that your brand will lose fans and followers if you overwhelm them with monotonous posts. But, if you are willing to put effort into creating engaging, valuable social media content, you can create connections that last. By surprising consumers with unexpected, yet relevant posts you can keep your friends—and maybe make a few new ones!

One for All, and All for One: #HeForShe

Omnicom and Publicis Call the Whole Thing Off