What can we in the media world learn from apes, elephants and several other animals? Besides the occasional eye-opening Discovery Channel documentary and some great cartoons, there’s more to uncover here than you might think. 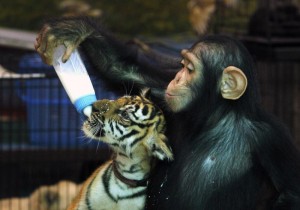 Waal published an interesting study in The Wall Street Journal over the weekend detailing the flaws in how we as humans approach the study of animal intelligence. Using several examples, de Waal illustrates that our previous perception of animals being purely primitive and instinctive in their IQ level is actually a competence flaw among us as humans. Here are two quick examples of what these tests on animals reveal about humans:

The Elephant Test: Originally scientists tried to entice an elephant to use its trunk to reach for a stick that would help bring an out-of-reach piece of food closer, not realizing that picking up the stick with its trunk would block its nasal passages, thereby making it unaware of the food. They mistakenly concluded the elephant was not intelligent enough to perform the exercise.

The Chimp Test:  Scientists put chimps through facial recognition exercises using only human faces and, when the chimp delivered an average performance, they mistakenly concluded that chimps were not smart enough to perform facial recognition. After discovering their blunder, they replaced the human faces with those of other chimps, and the test results skyrocketed.

As media professionals, we can benefit tremendously from recognizing the false assumption that reporters speak the same language that we do, and it can help us to create more productive conversations. How often do we find ourselves dejected that a story idea pitched to a reporter didn’t even warrant an e-mail response from the recipient?  And here we sit thinking reporters just enjoy sending our e-mails straight to their junk folder!

More likely than not, we are not speaking their language in our pitch. Whether it is the topic, wording, or structure, something in the way we crafted our communication to them was lost in translation. Rather than placing this reporter on our black list and moving on to the next person, it behooves us to try and learn their language first.  Follow up by phone until you get them on the line. If they are still not interested, ask for feedback – “What are you looking for instead?”  Odds are you have another client or spokesperson that might be a better match. Making this extra effort rather than locking in on placing one specific spokesperson can make you a more efficient PR professional, and can also improve your relationship with that reporter.

This article also teaches us the importance of knowing your audience. Sure, a placement in The Wall Street Journal is fantastic – if that is who your client is trying to reach.  But if you represent a client in the automation and electronics sector, then you’ve just wasted the time of over 2.5 million readers and, in doing so, could have damaged your client’s brand.  Surely, a quick blurb in a 10,000-reader technology trade publication would have been much better because it targets the right people and is written in the correct language for the targeted audience.

In conclusion, de Waal’s article was a refreshing reminder that the key to self-improvement is self-reflection, and those of us humble enough to adopt this approach will be well-rewarded.

Do you believe communication barriers are the primary hurdle to our efficiency? How else do you think this article applies to how we in the media world operate? Join the discussion!

What's Wrong with Being Bossy?

Self-Education: Learning about SOPA and PIPA