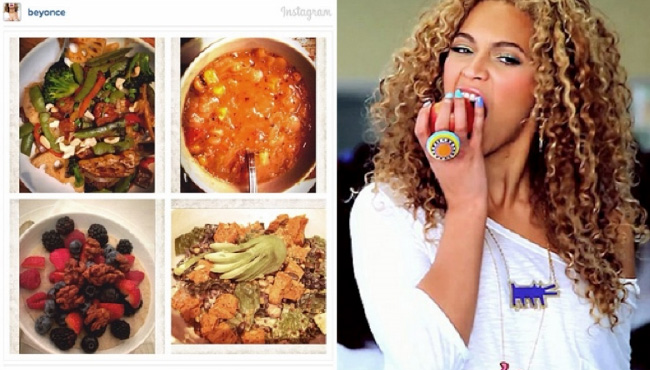 I've forever held the belief that celebrities "afford" to be fit by being able to pay the $12.50 for a 4-ounce kale and flax-seed smoothie, only to be drunk after a three-hour workout in their state-of-the art home gyms with $600/hour personal trainers. It's often frustrating for us un-famous folks to try and keep up with the latest clean eating trends when they cost half a paycheck. So kudos to Beyonce who, despite being a celebrity, has signed on with vegan home delivery service, 22 Days Nutrition, to inspire us more budget concerned health nuts to eat clean. With the help of exercise physiologist, Marco Borges, Bey is pairing two things America loves–herself and online ordering food delivery services like Seamless–to promote healthier lifestyles among the general public.

Not only has 22 Days Nutrition promised meals comprised "100% organic, Non-GMO, dairy-free, gluten-free and soy-free ingredients that nourish the body, mind and soul", but the weekly meal delivery service inadvertently has the best social media non-campaign my Instagram consumed eyes have ever seen. Given Beyonce ... excuse me, Queen B's notoriety as an empowering musical genius, mother and role model, the name association itself is enough to spark an award-winning social media campaign as organic as 22 Days Nutrition's Almond Berry Breakfast Loaf.

In the PR world, the goal of social media, affectionately known as "your electronic second life," is to leverage fluid digital platforms that host your content and messaging in varying formats, from 140 characters to 10-second videos, likened by message-hungry users from every generation. By leveraging the simple association with Beyonce, 22 Days Nutrition was instantaneously raised and promoted to billions of impressionable eyeballs around the world.

For example, the organic promotion sounds something like this . . . Lets say Person A reads about 22 Days Nutrition on E! Online and posts the article to his or her Facebook page with the caption, "Feed me Queen B", tagging Beyonce's page, which has 67.5 million likes and 164 thousand people talking about it. Those 164 thousand people are now inadvertently talking about the new meal service, including Person B, a big fan who checks B's page daily. In minutes, Person B clicks on the website and starts ordering his or her next weeks' meals. Before you know it he or she is Instagramming his Sesame Cabbage Lentil bowl with the hastags #EatCleanByB #CleanEating #FitLife and #LentilFull, only for Person C to see as he or she is looking for some inspiration to stop cheating on his or her diet. Person C searches the hashtag #FitLife, sees Person B's post and thinks, if Beyonce likes it, I will too, right? Before you know it Person C is on the confirm order page for his or her first week of 22 Days Nutrition.

Admittedly, I was one of those "Persons", innocently scrolling through Instagram only to land on the checkout page of 22 Days Nutrition within minutes, ready to shell out money because . . . why? Because Beyonce (through a few million layers of social networking) said so.

Now raise your hand if you've been personally victimized by the greatest sales tool there ever was ... social media.

Finally, Some Good News: One Community