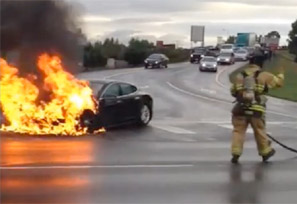 Tesla’s shares have been on fire in 2013, soaring more than 400% year to date. While we’ve previously written about the shares strong performance, unfortunately, a fire of a different sort has been associated with the electric car maker recently, after one of its Model S vehicles burst into flames and the incident made it onto Youtube. This unfortunate accident, combined with a negative analyst report earlier that day, led to the stock falling more than 6%, shaving around $600 million from its market cap.

Tesla though promptly and effectively responded to this turn of events, and likely headed off a potential reputational crisis following what Reuters dubbed “a PR nightmare.”

While Tesla initially offered a holding statement from their head of communications, the company’s CEO, Elon Musk, quickly began communicating why this shouldn’t be viewed as a negative for the company. Specifically, Mr. Musk authored a blog post clearly and transparently explaining what happened, and emphasizing the unique nature of the incident and how the Tesla performed quite well, given the conditions.

Musk not only discussed what happened to the beleaguered Tesla, he also compared the accident to what would have happened to a conventional automobile in a similar situation, saying that “the result could have been far worse.” This is because such a vehicle “only has a thin metal sheet protecting the underbody, leaving it vulnerable to destruction of the fuel supply lines or fuel tank, which causes a pool of gasoline to form and often burn the entire car to the ground.”

After quoting some statistics revealing that a driver is “5 times more likely to experience a fire in a conventional gasoline car than a Tesla” Mr. Musk emphatically concludes that “there should be absolutely zero doubt that it is safer to power a car with a battery than a large tank of highly flammable liquid.”

But Mr. Musk’s transparent communications effort doesn’t end there, the post closes with a copy of the company’s correspondence with the driver of the vehicle involved who agrees “that the car performed very well under such an extreme test.”

Tesla shares rose 4.4% the day that Mr. Musk released posted his blog response – showing that the markets appreciate a CEO who can clearly and effectively communicate through a crisis.

Who Was Your 4th Grade Teacher?