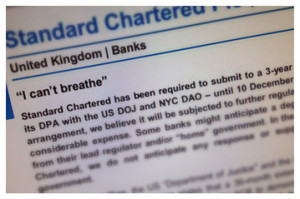 While inappropriate and insensitive comments related to emotionally charged events are par for the course on social media today, one made an appearance in an unlikely place—a sell-side equity analyst's research note. Specifically, an analyst at Investec, a British and South African Bank, headlined a research note discussing regulatory constraints placed upon Standard Chartered with the title "I Can't Breathe" in reference to Eric Garner's last words.

Moreover, when contacted by the FT, the analyst, Ian Gordon, not only confirmed that the title was meant to refer to the tragic death of Mr. Garner, but that his original language had called Mr. Garner's death and StanChart's regulatory troubles "both examples of abuse of power or authoritarian control gone wrong," though this was edited out by Investec's compliance professionals.

Mr. Gordon then went ahead and doubled down on his point of view by saying that "The parallel, or lack of parallel, is that in the Garner case you see widespread anger and uprising in the public"... In the case of StanChart—and yes, it is very different circumstances—but the silence of the UK government is perverse given the circumstances. StanChart itself is gagged."

This highly inappropriate language garnered criticism from a variety of sources, including New York banking regulator Ben Lawsky (who is one of the regulators the note referred to when saying "Standard Chartered will continue to face uncontrollable regulatory expense generated by the activities of multiple US agencies") and led to the bank apologizing "unreservedly for the inappropriate content in this morning's research note on Standard Chartered, and for any offence cause. The content in question does not represent the views of Investec."

This odd turn of events is preventable. A good rule of thumb is that if you're wondering whether something you are writing for a business audience will be offensive, you should just err on the side of caution if possible and not offend anyone. In this situation the provocative and offensive title didn't add anything to the substance of the note, and now Mr. Gordon's points about potential regulatory over zealousness by US is forever lost in a sea of criticism, which surely was not his goal. I think in this case Mr. Gordon's attempt at an attention grabbing headline was too clever for its own good.

Give & Take: What’s the Story?

Job interviews can be daunting and they can rattle the nerves of even the most thoroughly prepared candidates. Prosekian Kayla Muller recently met with students at The HOPE Program (HOPE) for a workshop on how to successfully nail an interview.