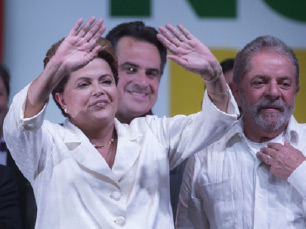 The results are in and, in Brazil's closest presidential election ever, the incumbent Dilma Rousseff (Worker's Party, 51.6% of the votes) retained her position as president of Latin America's largest economy after beating out former Minas Gerais governor Aécio Neves (Brazilian Social Democracy Party, 48.4% of the votes).

In our last post on the issue, we had framed this battle as one between voters who prioritize economic reform, and thus would support Aécio, versus voters who prioritize social programs, thus supporting Dilma. This is precisely how the result played out. Dilma won most of the more rural and dependent Northern states, particularly the Northeast, whereas Aécio won most of the southern, more developed states.

As predicted, financial markets did not receive the news well. The country's currency, the Real, has considerably weakened since the news, down to $2.53 at the time of this post, a new nine and a half year low. The country's stock exchange, the Bovespa, is also facing a steep selloff.

Yet, there is a strong sentiment among Brazilians that while conceding the battle to the status quo, the fight for change in Brazil is certainly not over. Social media channels have exploded with posts along the lines of "just wait till 2018 [the next Brazilian election]", or "this was a great development for Brazil [referring to the close results]". As such, some expect Dilma to adopt a more conciliatory role in some regards to protect her party's position for the 2018 elections.

All this aside, there are significant parallels between what financial PR professionals face on a daily basis. First, there is the overarching negative stereotype attributed to the rich and prosperous. Dilma's victorious campaign largely positioned her as someone fighting for the poor, and her attack ads made Aécio out to be an elitist who was more concerned about the wealthy. With Brazil's poor still representing a significant part of the population, this tactic worked well for Dilma.

As a financial PR firm, we too often encounter constituents or critics who try to play up the greedy Wall Street firm stereotype when assessing financial companies, a card that is often played by those who seek to generalize out of convenience rather than doing their homework. It's our job to tell both sides of the story. Sure, not all financial companies are angels, but not all of them have dollar signs for corneas either, and the insight that many provide, can in fact help the average individual understand financial markets. Essentially, this all comes down to storytelling—who can present the most transparent, detailed narrative that best connects with key audiences. A second parallel takes into account the concept of activist investor campaigns, which have dramatically increased in the past few years. You're consistently seeing a battle between the interests of shareholders and the interests of the broader company. While, in theory, and much like how a country is governed, those interests should be aligned, that is not always the case. In returning to the parallel with Brazil's elections, consider Aécio and, frankly, the entire anti-Worker's Party (Dilma's party) movement to be the activists in this case, driving to fix Brazil's economy and unseat the incumbent in order to enhance growth and progress. They may have fallen just short this time, but this is not going away anytime soon. Point in case—candidate/activist Marina Silva who, while losing in the primaries this year, garnered over 20 percent of the nation's votes after campaigning for only two months (she entered the race in August), and certainly has an eye on 2018.

These elections have laid the foundation for what will be a riveting next few years in the course of Brazilian history. The nation has spoken—while satisfied enough with past progress to keep the status quo, there is a burning desire for more progress, more change, and a new approach to governance. What is most reassuring here from my seat, and as a Brazilian, is that the passion for our country remains intact, evidenced by the way in which people have voiced their concerns, regardless of what side they fall on, to achieve a better, stronger Brazil. Both Dilma and Aécio, following the elections, stressed the importance of unifying a country whose presidential vote was practically a 50/50 split. One can only hope this unity transpires as planned to support the slogan bared on our flag, "Order and Progress". There is no denying that Brazilian elections, more-so than ever, have multiple, growing audiences that need to be well-communicated to. The nation's next president in 2018 will be he or she who communicates best to all of them.