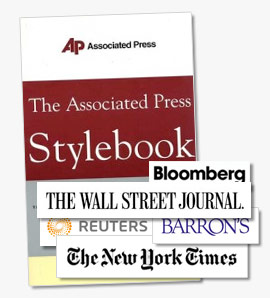 Associated Press style, which is used by news organizations across the county, is what we follow at Prosek Partners. We don’t use Oxford commas; we write 4:30 p.m. instead of 4:30 PM; and we’ll write Mr. Edwards’ to designate possession when we know that really it should be Mr. Edwards’s because Edwards is singular. AP style strives for as clean and simple a look as possible.

There are, however, a few places where the AP does not weigh in. In the public relations field, we find ourselves writing publication names many times a day. Some days I probably write The Wall Street Journal more times than I write my own name. The question of whether or not publication names like The Wall Street Journal should be italicized is not as straightforward as some might think. We’ve all heard that italics are the proper way to designate a publication that runs in print. But the AP stylebook doesn’t say this. In fact, in over 300 pages of text, the AP style book does not address the issue directly at all. So what’s a PR professional to do? At Prosek, we tend to err on the side of formality and italicize publication names in all our documents, but is this the right decision?

In the evolving world of media, differentiating between a print publication and an online publication seems a bit outdated. The online version of The Wall Street Journal gets about 8 million readers to the print edition’s 1 million. Many of the best-read news outlets don’t even have print editions. Others, like SmartMoney, have announced that their print editions will cease to print at all.

What if I want to report that an article ran in The New York Times online, but it didn’t run in the print edition? Is it still appropriate to italicize The New York Times or is that a bit misleading? What if the publication is primarily known for being online, like Politico, but does in fact have a little-known print edition? If I italicize The Wall Street Journal, do I also then italicize references made to the Journal or to WSJ? Does italicizing the names of some outlets make the non-italicized outlets seem less important by comparison? Bloomberg and Reuters will never be italicized, but the impact of placements in those publications can be dramatic. I don’t see why these important outlets should look like second-class citizens on a list of their peers.

I think we should use the newspapers themselves as our examples. The Wall Street Journal and The New York Times do not italicize publication names at all in their news stories. But then again, Barron’s italicizes publication names. Are the editors who don’t italicize striving for as simple and clean a look as possible, or are they maybe acknowledging that in today’s complicated media landscape, the designation doesn’t mean what it once did. What do you think? Is the use of italics for publication names a must or is it something we should phase out?

I’m a Working Mom and (Sometimes) I Suck

Emily Tracy shares how she juggles being a working mom of two.

Mobile: The Good, the Bad and the Busy