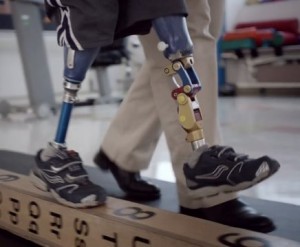 This year's Super Bowl saw Microsoft investing heavily with two 60-second spots promoting its 'empowering' campaign, in addition to an on-the-field sponsorship with the Surface tablet. Their best ranked ad was the heartwarming story titled 'Braylon'. You see a young boy running happily with prosthetic legs, grateful parents close behind, all made possible through Microsoft technology. While the ad didn't carry the typical shock value that makes for interesting conversation the next day, USA Today ranked 'Braylon' 4th in the overall popularity of this year's Super Bowl ads.

Microsoft's history in the big game goes back only one year. In 2014 it had one 60-second spot about technology empowering humans to achieve. Among a montage of clips is a young boy running on prosthetic legs. Sound familiar? "'Braylon' and the empowering theme were repurposed into the ad this year. To most brands, the big game provides a once-a-year opportunity to be creative, competitive and sometimes even risky and provocative. Apple with '1984' or Google with 'Parisian Love' demonstrated how a technology company might use the opportunity. But with repurposed content, Microsoft appears to have another agenda.

On the nation's biggest stage, Microsoft is forgoing shock value for consistency and presence. This says some things about Microsoft; that they aren't afraid to throw their weight around and they are going to proudly promote conservative messages. Microsoft is looking to establish deep and meaningful connections with its users, something that is difficult to do with the Super Bowl's traditional over-the-top, sensational and oftentimes less memorable advertising. But their recent surge into mass reach advertising says a lot more about marketing today and the technology marketplace.

Whether you need IT support, a new phone, an advertising strategy or are into gaming, Microsoft, and their competitors, want to reach you. If you want to search online, build a social profile, create an app, watch a movie, or invest in new software, Microsoft and their competitors want to reach you. As the industry becomes even more saturated and competitive, success is increasingly determined by long tail consumer audiences like you and me. While Microsoft was once considered so elite that they didn't need to heavily promote themselves, they are now engaging in aggressive consumer marketing tactics like the Super Bowl.

As a corporate giant we would expect Microsoft to buy out the biggest microphone and try to push their value onto you. It's a traditional marketing strategy, and it's always been effective. But marketing has changed, especially when it comes to our beloved technology. As technology and devices become more ubiquitous, we expect much more than just a value proposition through paid advertising. We want—and expect—an emotional connection to the things that are so critical to our daily lives. To convince us, Microsoft has made its move and staked-out mass reach via the Super Bowl. But can the corporate giant compete and evolve where it really matters in our day-to-day lives?

Book Review: How the Mighty Fall