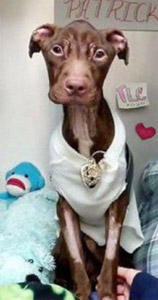 You may have heard of Patrick. The pit bull was starved nearly to death, stuffed in a plastic bag and thrown down a garbage chute in a high-rise apartment building. A  maintenance worker saw the bag move slightly and found Patrick, weighing just 20 pounds. Near death, he was taken to Garden State Veterinary Specialists in New Jersey, where he is beginning his slow recovery.

The story spread quickly across the U.S. and internationally. Patrick’s Facebook page, The Patrick Miracle has been “liked” nearly 58,000 times. The horror over Patrick’s abuse was followed quickly by anger over the potential punishment for the alleged abuser, a 27-year-old Newark woman.

Kisha Curtis was arrested Tuesday and charged with animal cruelty, which carries a maximum punishment of six months in jail or a $1,000 fine. The charges were later upgraded to “torture and torment of a living creature,” punishable by 18 months in jail or a $3,000 fine. Curtis, who also allegedly chained Patrick to a railing and left the state for more than a week, will be arraigned Thursday, March 31.

While the comments pages of websites overflowed with sympathy for Patrick, hatred for Curtis and fury about the lenient punishment, a Los Angeles woman named Rachel Wolf channeled her outrage. She began a drive to enact a measure called "Patrick's Law," which would treat all animal abuse as a felony, punishable by lengthy prison terms and big fines. The goal is to set up Patrick’s Law chapters in every state. The Patrick's Law Facebook page now has more than 26,000 “likes.”

If there’s a moral to this story, it’s that mass communication can link like-minded people and bring about real change. Hopefully, the story of Patrick’s torment will save other animals and inspire all of us to be advocates for the unlucky, innocent creatures who can’t speak for themselves.

In the meantime, my weekend plans include trying to trap a colony of feral cats and get them spayed or neutered. It’s a miniscule step to end the massive problem of animal overpopulation but it will hopefully prevent more unwanted cats from being born. And when the Patrick’s Law team moves forward with its state-by-state campaign, Connecticut legislators will be hearing from me.

The Importance of Being Curious