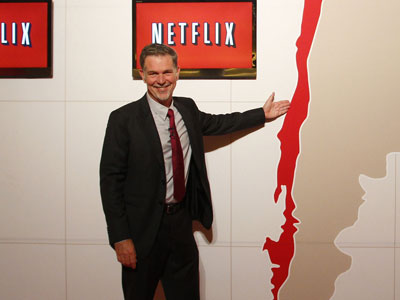 Netflix’s 14 Emmy nominations last week made the content-distributor-turned-studio an overnight critical darling. USA Today declared, “Netflix has come of age.” According to The New York Times: “TV Foresees Its Future. Netflix Is There.” There is, however, one instance of original programming Netflix produced that “won’t win any Emmys,” if we’re to believe Bloomberg Businessweek's Justin Bachman.

It would be an understatement to say that Businessweek’s Justin Bachman was not a fan of Netflix’s earnings webcast, which took place Monday.

Regarding the webcast, Bachman wrote, “The 30-minute chat session streamed Monday on YouTube was notable for the college dorm-like quality of the video production, complete with laptop cameras, bad lighting, and two guys in goatees.”

As a former college film major, I resent Bachman’s sweeping generalizations about the low quality of student film. But he and other critics of Netflix CEO Reed Hastings’ decision to administer the earnings call in an unconventional format do make some interesting points about the webcast’s most significant departures from the traditional call-in.

Netflix turned standard Q&A on its ear, for better or worse.

For the Q&A portion of earnings when investors and analysts typically jockey for spots in the queue to be selected by the omnipotent Thomson Reuters moderator, CNBC reporter Julia Boorstin and another analyst actually served as stand-ins, asking questions culled from those submitted via email and Twitter.

Bachman felt this unnecessary distance between the Netflix execs and analysts was detrimental. In another Bloomberg story, one analyst expressed concern at submitting his “questions in advance to a competitor or member of the press.”

Forbes contributor Mark Rogowsky actually viewed the change as a major plus. Rogowsky wrote regarding the Q&A format, “That innovation alone improved the question quality an order of magnitude over the typical call. Normally someone from XYZ Bank would be obsessing over why their Netflix model wasn’t adding up for Swedish subscriber growth and would take 2-3 minute of a 15-minute Q&A session seeking clarification.”

There’s also an argument to be made that the alternatively structured Q&A session paired with the use of YouTube and Google+ Hangout made Netflix’s call a lot more accessible to the general public.

According to Hastings, the webcast was modeled after the fireside chat format seen at investor conferences. “This is our attempt to bring that value to the broad online public,” Hastings said.

Whether or not Hastings’ objective is to entice Netflix customers and non-investors alike to warm-up to the idea of purchasing Netflix shares is anybody’s guess. But perhaps we will see an improvement in the tried and true, PDF-bound, conference-call-line-constrained way in which companies conduct investor relations as leaders like Hastings continue to push the envelope.

Author’s note: Netflix is not the first company to attempt a live video feed in place of the standard call format. Most recently on July 16, Yahoo’s second quarter earnings webcast featured CEO Marissa Mayer and CFO Ken Goldman from the Yahoo! Finance studios, and as Mayer pointed out, taking advantage of Yahoo innovation. [H/T Businessweek]

Leadership in the Heat of Battle