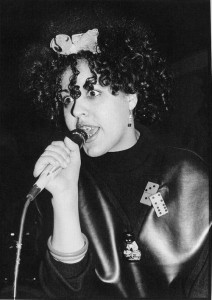 Flying a bit under the radar today is the sad news that the world has lost Marian Joan Elliot-Said.

Poly turned the music world on its ear as the front-woman for X-Ray Spex in the late ‘70s.  Poly, or Marian, lost her battle with breast cancer this week.

If you think Green Day defines punk and Lady Gaga defines edge, click here for a video to see the woman and band that spawned the “Riot Grrrl” movement of the ‘80s and early ’90s -- bands like Sleater-Kinney and Bikini Kill.

From the Telegraph in the U.K.: “ …a woman of mixed race who wore fluorescent thrift-shop outfits and proudly sported dental braces onstage, she refused to conform to conventions of how female performers — punk or otherwise — were expected to appear.”

Poly was moved to start the band after seeing the Sex Pistols in concert.  Sadly, she was diagnosed right after releasing her last album, “Generation Indigo” within the past year.