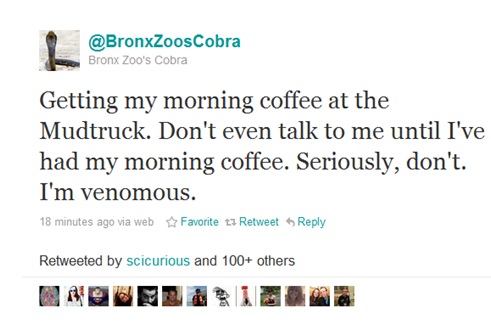 And it wasn't even a slow news day when the missing Bronx Zoo’s Cobra was anything but as he slithered his/her way onto Twitter and made headlines while accumulating over 78,000 followers and posting over 40 tweets, all mostly in a day’s work on Tuesday.

The @bronxzooscobra is a quick study in the power if not the rapid-fire pace of Twitter and its social-media network.  Not only did the media (constant repeat on taxi news, among other places) and the well-tweeted Twitter tribe start following the cobra nearly instantly but New York retailers, such as @magnoliabakery, @Equinox and @Bergdorfs received shout outs from the snakeonthetown.

What a great act or art of entertainment, marketing (Cobra only follows the Bronx Zoo on Twitter, by the way) and building a social community, even if it lasts only briefly.

But who was behind this “act” and how can I get in on it? As a former journo, I asked BZC for an interview, which he granted over email. Read the enlightening interview below as we get a glimpse of the viper behind the tweets...

Unboxed Thoughts: Mr. Zoo Cobra, are those real or capped? Whatever, it’s working for you.
Bronx Zoo Cobra: Thank you, Invisalign.

UBT: Harry Potter or Draco Malfoy?
BZC: I know most people will expect me to be Slytherin, but I am Team Hufflepuff.

UBT: Who’s your favorite charmer?
BZC: Alyssa Milano. She played a great witch in that show.

UBT: Thoughts on Monty Python?  Or better not to ask?
BZC: He thinks he is such a big deal just because he's been in the Reptile House longer than me. Oh, did you mean the comedy group?

UBT: What do you think of life on the “other side”? East Side or West Side?  Uptown, downtown?
BZC: I'm loving it all. I don't know how I feel about Williamsburg. They keep telling me they thought I was cool before I got popular.

UBT: Any regrets?
BZC: I don't regret a thing. All my experiences have made me the snake I am.

UBT: And when you next shed your skin, what is revealed?
BZC: The hottest new look for summer, of course.