Still Don't Believe in Social Media? @AnnCurry and @WednesdayWalsh Prove You Should

Many of us in the PR world have gotten on our soapboxes over the last few years,  repeatedly proclaiming that social media is here and you have to care about. The way we communicate is drastically changing. Phone conversations are dying and people across the globe are texting, tweeting, BBMing and liking with fervor and frequency. But the skeptics remain. What value can be derived in 140 characters? Well, if you ask Twitter user @wednesdaywalsh,  I’m sure she would tell you that plenty can be accomplished.

You see, the person behind the Twitter handle is Megan Walsh of San Jose, California and she used the microblogging site to track down her sister, Canon Purdy. Canon had returned to Japan, where she previously taught English, to visit her former students. As fate would have it, she arrived just as the country was hit by the deadly earthquake and tsunami. Unable to reach out to her family because of the damage to Japanese infrastructure, Canon’s family was left wondering if their daughter and sister had survived the disaster. 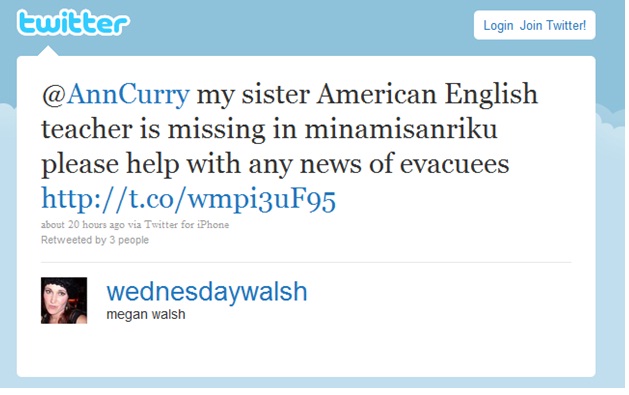 It was in this desperation that Megan turned to Twitter. As a follower of TODAY host Ann Curry, Megan saw that Curry was traveling to Japan to provide on-the-ground coverage of the catastrophe for NBC. She reached out to the popular news personality writing simply “@AnnCurry my sister American English teacher is missing in minamisanriku please help with any news of evacuees http://t.co/wmpi3uF95” (132 characters). To Megan’s surprise, Curry responded “@wednesdaywalsh the link won't open for me here. If you could dm [shorthand for “direct message”] me details, I will do my best.” 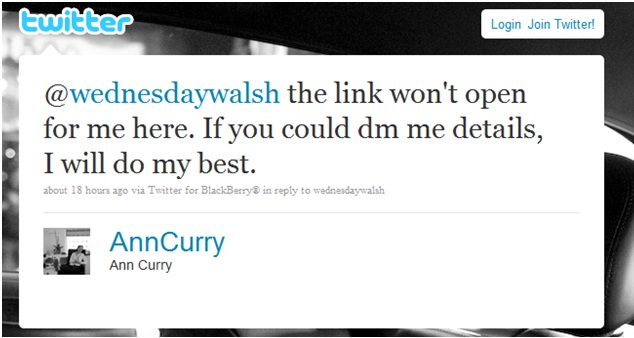 After corresponding directly, Curry received a picture of Canon which she was able to use to track down the American citizen. The beloved sister and daughter was then reunited (via satellite) on yesterday’s TODAY (video also below).

If you didn’t believe in social media before today, I sincerely hope this story will give you cause to reconsider. Megan was not in a position to track down her sister.  But through the power of social media, she was able to begin a dialog with a journalist and celebrity in a way that, until Twitter, was not possible. Kudos to @AnnCurry for her willingness to help and her transparency and openness through the website. As we say to our clients: engaged, honest and transparent communication through your social media channels will win you popularity among your audience. I happen to think Ms. Curry has a few more fans in San Jose than she did last week.

I’ll close with the words with words from Megan, via Twitter, “@AnnCurry I LOVE YOU THANK YOU FOR FINDING MY SISTER!!!!!!!!!!!!!!!!!” Those are 69 characters that speak volumes about the power of social media.

Visit msnbc.com for breaking news, world news, and news about the economy