A Few Good Investors: A Review

The average annual household income of adults reading the New York Times (weekday and Sunday editions combined) is $74,656.  Or roughly $4,000 more than what a hard-working up-and-coming trader would expect to pay Saunders Realty of East Hampton to rent (from MD to LD, in real estate parlance) a 3,000-square-foot, snow-white, rectilinear summer place on eight tenths of an acre, close to town, with four bedrooms, four baths, heated gunite pool, fireplace, central air and a half-moon drive to park his or her (but overwhelmingly his) Porsche 911 Carrera, featuring Bluetooth phone and keyless entry, available on a 21-month lease out of New Preston, Connecticut, at $1,199 per month. 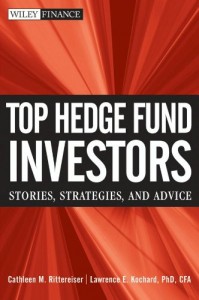 Considering the barrage of steady coverage hedge funds receive in the New York Times alone, a casual observer turning to the Times business section could be forgiven for thinking the average subscriber is making around 10 times that figure and has considerable exposure to alternative assets.  Which is another way of pointing out that hedge funds have become the sports department of the business press.  From a base of 30 funds with $300 million in capital in 1971, hedge funds by mid-2008 had bloomed like algae on an Amagansett pond, reaching an estimated $2 trillion invested in more than 10,000 hedge funds.

Having ridden out a distracting inconvenience known as the Financial Crisis largely intact – hedge funds had average gains of 8% worldwide in 2010, according to Absolute Return+Alpha – as a group, they are expected to log record performances in 2011.  A poll of Hedgefund.net readers asking what they think 2011 holds in store for hedge funds found 30% predicting a banner year.  A sober 34% predicted 2011 will be the “year of regulation,” but they’re just being spoil sports.  Regulations are not going to change the world of hedge fund investing in any long-range sense of the word.

The Stars Come Out

One of the inevitable by-products of any industry receiving such unrelenting media attention is the emergence of a robust star system.  On rare occasions, even savvy journalist -- and I’m thinking of a very well-known private equity scribe, specifically – can be seen succumbing to the pixie dust atmosphere of wide-eyed wonder in the presence of the most powerful masters of the universe.  But such free passes are exceedingly rare, and the press can be counted on to observe its raison d'être with consistency: afflicting the comfortable and comforting the afflicted.  And there’s no one editors love to afflict more than a 40-something hedge fund manager pulling down hundreds of millions of dollars a year in compensation.

As hedge funds have matured, they have continued to insinuate themselves into the mainstream, albeit the periphery.  Nonetheless, convergence with traditional asset management seems all but inevitable, especially with pensions increasingly exposed to alternatives as a matter of course.  Indeed, as Cathleen M. Rittereiser and Lawrence E. Kochard, PhD, CFA point out in the early pages of their recently published book Top Hedge Fund Investors: Stories, Strategies, and Advice, “….hedge funds are a household word because they are here to stay.”

“They became popular because absolute return investments can provide excellent, risk-adjusted return with low correlations to the markets and other funds.  While the returns may be less attractive in the future, the role they play in diversifying investment portfolios will remain important.  Investors will benefit from learning more about hedge funds and from getting insights and advice from accomplished hedge fund investors.”

Which is exactly what Rittereiser and Kochard have done.   Rather than point a spotlight on the star managers in the spirit of Katherine Burton’s Hedge Hunters and Steve Drobny’s Inside the House of Money, the focus in Top Hedge Fund Investors: Stories, Strategies, and Advice is on investors – nine in particular – who have long, impressive histories of investing with the best managers.

Both authors bring strong pedigrees in the alternative universe to the task at hand.  Rittereiser, an alternative investment marketing executive with more than 20 years’ experience in financial services, has held positions with leading asset management, research and brokerage firms.  She recently was appointed director of investor relations and business development at Concordia Advisors.  Kochard has been chief investment officer at Georgetown University since 2004. Prior to that he was managing director of equity and hedge fund investments for the Virginia Retirement System, and worked for Goldman Sachs earlier in his career.

The hedge fund industry traces its roots back to the late 1940s and sociologist-turned-journalist-turned-money manager Alfred Winslow Jones.  From Jones, it’s a relatively straight line to the leading lights of the industry, luminaries such as Warren Buffett, Barton Biggs, Julian Robertson, George Soros, Michael Steinhardt and Jack Nash.  More striking is the relative speed with which endowments and foundations turned to hedge funds.  Twenty years after Carol Loomis at Fortune introduced Jones to the wider investment world in her article “The Jones Nobody Keeps Up With,” Julie Rohrer profiled Julian Robertson for the May issue of Institutional Investor.  The bull market poured petrol on the hedge fund.

A brisk history lesson and a concise review of hedge fund strategies pave the way for nine compelling profiles, which are the meat of Top Hedge Fund Investors.  The link between hedge funds and journalism runs deeper than I had been aware.  Alfred Jones spent time as a journalist on his way to becoming the father of the hedge fund.  Richard Elden, founder and former chairman of Grosvenor Capital management, was a Chicago newspaper reporter in the late 1950s and early 1960s.  Elden is quoted describing journalism as “the best training in the world” for his subsequent career in hedge funds. “Essentially, I’ve been a reporter for 55 years, the last 38 applying my reporting skills to checking out money managers.  To me, it’s just an extension of reporting.”

If there is a singular difference in hedge fund investing today that sets it apart from the early days of the industry, it is unquestionably the complexity of strategies. What remains largely constant is the need among young, highly talented managers for advice, resources and support in building a reliable, professionally run organization to provide a foundation for managers to run their portfolios.  Frank Meyer, founder and former chairman of Glenwood Capital Investments would take on that role with a young student at Harvard who had developed his first convertible bond arbitrage model and traded from his dorm room. In 1990, one year after graduation, the now fabled Ken Griffin launched Citadel as a single-strategy fund.

Permal Asset Management’s James Hodge is cited for his bias for stars, despite the occasional risk of a high-octane flame out.  From the 7,000 or so hedge funds active today, Hodge says, one can find 100 to 200 that are well above average in their abilities and returns.

From there a person can assemble what he considers an ideal portfolio: “One hundred managers at 1 percent allocation.”  With such a portfolio investors can “get a very nice set of returns, well above average, good returns, and have much less volatility as compared to market indices, like the S&P 500.”  The best thing about small positions, Hodge says, “is that God forbid you have a blow-up or even worse, a fraud, at least it’s only 1 percent of the portfolio.”

Then there’s Mark J.P. Anson, PhD., JD, CFA, CPA, CAIA and managing partner and chair of the investment committee of Oak Hill Investment management.  His training as a lawyer, on top of everything else, arms Anson with a spidery intelligence enabling him to regard multiple dimensions of a problem or opportunity.  Noted for his Buddha-esque Four Asymmetries, Anson has spent countless hours analyzing how hedge fund management and investment practices augur favorably for managers in ways that serve to peel true alpha from the husk of beta.  (You’ll have to read the book to understand that line.)

Mark Anson’s Top 10 hedge fund quotes, collected over the course of his career and alone worth the purchase price, range from the risible: “We charge 3 and 30 because that’s the only way we can keep our assets below several billion dollars,” to the quintessential: “He will be with you in just a minute sir, he’s still meeting with his architect.”

If there is a theme with myriad implications for the future of hedge funds, it is the critical need for bigger funds to embrace established and professionally grounded practices designed to ensure the stability of these firms as businesses.  In the words of Michael Steinhardt: “The hedge fund business today is a business.  It wasn’t always a business.  Years ago it was a profession.  It certainly wasn’t an enterprise that required a great deal of organizational skill.”

Top Hedge Fund Investors does a service to the industry by showcasing the individuals who truly shaped the evolution of the business.  And it affords arrivistes and other interested observers a chance to dip into concise explanations of underlying concepts endemic to the industry.  All readers will come away with the knowledge that hedge funds have grown up and their future looks bright.

The Role of PR in Mexico's Mid-Term Elections