Did you know that there are approximately 22.9 million Asian American and Pacific Islander residents in the U.S.? Considered to be the most diverse minority group, these AAPI residents trace their roots to more than 20 countries in East and Southeast Asia, and the Indian subcontinent, each with unique histories, cultures, languages and traditions.

Diwali is one of the most popular Indian festivals. Growing up mostly in Singapore, I had the benefit of being geographically close to India, as well as having access to its large expat and local Indian community. For those of you who don’t know, Singapore is a melting pot of its own, where there are three predominant local cultures; Chinese, Malay, and Indian. But being a trading and financial hub, Singapore also houses a larger than usual expat population.

Celebrated in October or November each year, Diwali signifies the triumph of good over evil. Legend has it that when King Ram returned home after defeating the demon king Ravan, people of his kingdom lit lamps to celebrate. For this reason, it is also known as the festival of lights. Diwali night is considered to be very auspicious, and we decorate the outside of our homes with lights, little candles called diyas, and rangoli (colorful patterns made of powder), to invite the Goddess of Wealth, Lakshmi, into our homes.

Diwali is a time for new beginnings, and this can mean spring-cleaning, new clothes, visiting friends and family to exchange wishes and Indian sweets, and lots of dinner parties where adults often gamble at cards to test their luck.

So, what does Diwali mean to me? All of the above. In fact, I had to do minimal Googling to type out all this information (except for fact checking, of course). Every year, I would look forward to my house getting set up a month in advance for the string of parties to follow, my new ensembles that my mother, who is now a retired fashion designer, would outfit me with, and most importantly, the nights filled with bursting sparklers – another cornerstone of Diwali celebrations.

Despite having lived in multiple countries throughout my life (5 to be exact!), this is the one time of the year I get the most homesick. This festival, which has generally taken on a more cultural significance rather than religious, remains so close to my heart for all the fun and light it brings. I encourage everybody to participate in it at least once if you get the chance, and don’t forget to dress in Indian clothes, as your hosts will love it. Thank you for allowing me to share what it means to me.

Included is a picture of my family (me, my mother, cousin, sister, and father) celebrating. I hope to be able to share festivities with you in person as well! 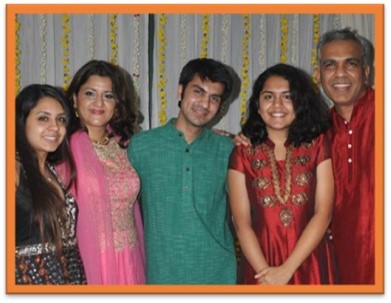 As a Singaporean-Chinese, we celebrate Lunar New Year between the end of January to mid-February each year with the exchange of oranges and red envelopes filled with money for good luck. Along with that, we have an iconic Lo Hei.

Lo Hei in Cantonese directly translates to “tossing up good fortune”, and it refers to our Lunar New Year ritual in Singapore that involves family and friends gathered around a massive plate, tossing the Yu Sheng salad (raw fish in Mandarin) while shouting auspicious phrases and blessings. The dish was brought to Singapore in the late 19th century by the migration of Cantonese and Teochew migrants from China, and it remains a vibrant centerpiece and highlight of the Lunar New Year festivities.

This appetizer is a large colorful salad consisting of thin slices of raw fish and a variety of vegetables, sauces and condiments that have specific representations behind them. For example, crackers symbolize wealth, carrots represent good luck, and raw fish represents abundance and prosperity. The dish is often prepared at the table with each ingredient methodologically added into the salad as auspicious blessings are announced. Once everything is added, all diners at the table will stand up and proceed to Lo Hei. It is popularly believed that the higher the toss, the greater your blessings will be for the year ahead so everyone is expected to toss and shout well wishes enthusiastically. In fact, many families usually end this prosperous toss with more food on the table and floor than on the plate.

If you’re ever in Singapore during this festive period, you are most definitely invited to join my family’s Lo Hei! 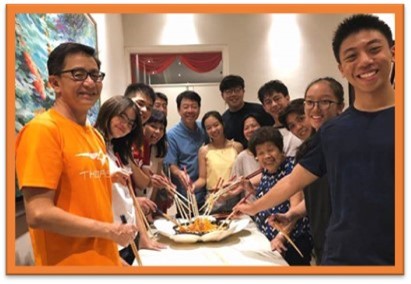 As many of you know, India is a country of festivals – with 36 major festivals each year. And I’m going to be talking about one of my favorite ones – Diwali, also known as the “Festival of Lights.” Some of the most cherished memories for every Indian child would be that of Diwali – it brings together the entire family for a period of 4-5 days filled with fun, lights, fireworks, and most importantly, the food. Every Diwali, my family and I would get dressed in Indian traditional attire, light “diyas” (candles) in and around our house, cook and eat good Indian feast and ultimately, wrap each Diwali night with rounds of poker. My family is very fond of poker and therefore, playing poker every night during Diwali became our very own cherished tradition.

Unfortunately, with the current times, I haven’t been able to celebrate Diwali with my family back in India for the past two years, but made it a point to celebrate the festival with friends turned family, here. Once things get more normal, I can’t wait to go back home, light diyas, eat the feast and play poker just like before!

Diwali 2020 was celebrated staying at home. To get a glimpse of some of my Diwali baking, see below. I’ve also included a picture of me from Diwali 2020!! 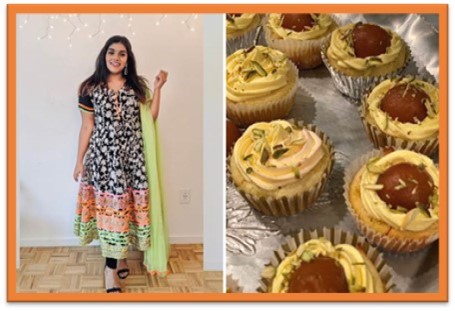 In my family, one of our newer traditions is inspired by an old one. Growing up, my parents, my brother and I would drive up from San Francisco to Lake Tahoe or Davis, California to celebrate Lunar New Year with my Nai Nai and Ye Ye (my grandparents). As a kid I admittedly didn’t know much of the history or meaning behind the holiday, but I did know that we’d receive red envelopes with a fresh $20 dollar bill, some sort of Chinese martial arts movie would be playing on the TV in the background and we’d be eating hot pot. Hot pot (as many of you likely know) is a delicious and communal way of eating, where all the diners sit around a boiling pot of broth and drop in various meats, veggies, seafood, etc. I remember my mom fishing me the noodles and tofu out of the boiling pot, as those were my favorites.

When I moved to New York, very far from my family, I was pleasantly surprised to find so many hot pot restaurants and often went to them with my friends for birthdays. Now, my immediate family does hot pot for all sorts of celebrations, including as a special treat when I come home from NYC. That, combined with my mom’s jiaozi (dumplings) is the meal I look forward to the most when I’m home.

The Chinese New Year holidays have always been one of my favorites not only because it was my chance to fly home, but also of all the good food and traditions that come alongside. In Hong Kong, we enjoy what’s known as poon choi during the holidays, which essentially a one-pot casserole dish with an overflowing amount of food such as roast meat, abalone, shrimp… The more ingredients, the better, as it symbolizes wealth and prosperity in the coming year. Locals typically pick this cuisine up from local restaurants, but my family likes to make our own version since we have very eclectic food preferences, and we will start preparing days in advance to source ingredients from local markets (which are absolutely nuts during the holidays) and make sure this one dish satisfies every single member in the family. The planning and cooking process is a mess, but the end product always turns out delicious and makes me look forward (maybe) to repeating the process next year. 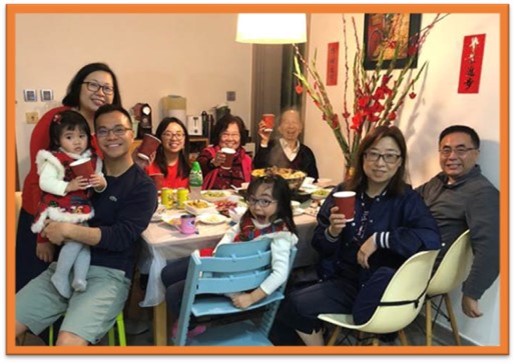 My favorite family tradition is playing mahjong.  The mahjong table is almost as central a fixture as the dining table at every family gathering, whether it be a holiday or birthday celebration, or just a spontaneous get-together.  Pinoy/Filipino mahjong varies a bit from the traditional Chinese mahjong and the Americanized version.  For example, we refer to some of the key strategies and ‘hands’ with Spanish and English words—some remnants of our history as a colonized nation—and some in Tagalog.  My mom and her nine sisters learned how to play from their grandmother, just as my grandmother taught me and her other granddaughters (or at least her favorites).  Some of my earliest memories are of watching my mom play mahjong with my titas (aunts) as they exchanged the latest chismis (gossip).  Now that I’m older, I get to partake in the low-stakes gambling, friendly competition and chismis with my mom, titas and cousins.

Here’s a pic of my mom’s side of the family!  Unfortunately, not everyone is in it, but it’s most of us—my mom (in the top left corner in the white pants), my grandparents (in the center), eight of my nine titas, both of my titos (uncles), and seven of my eighteen cousins.

Holiday festivities look different from family to family, but also from culture to culture. In the Filipino culture, holiday celebrations are quite colorful, lively and full of traditions.

With my family, holiday traditions include putting up Christmas decorations as early as September (my parents, not me!); attending “Simbang Gabi,” or night mass for all nine days before Christmas (as a religious practice, but also because attending all nine days is supposed to grant you a wish); and partaking in “Noche Buena,” a traditional feast served at midnight on Christmas day where we indulge in lechon (roast pig), noodles, fish, paella, bibingka (coconut rice cakes), queso de bola (ball of cheese), hot chocolate and other rich, savory treats (because staying up late can make one quite hangry).

Perhaps my favorite and most memorable family holiday tradition is hanging the Parol, a traditional star-shaped Christmas lantern made of bamboo, plastic, capiz (shells) and other translucent materials. In the Philippines, these lanterns would be hung at windows of homes to light the way for those attending midnight mass. My family still display the parol I made with my parents when I was seven years old – it has lights, wears Christmas colors, and most importantly, has a little music box that played Filipino Christmas music when you plugged it in. It’s magical, and my sister and I take turns each year hanging it up in the largest window of our parent’s house.

Food Flight: What "Air Fare" Are People Consuming While They Travel

It’s Time to Get Busy

Andy Merrill shares his thoughts on the importance of staying busy and remaining active, even as we continue to work from home.