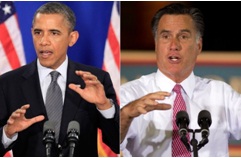 The Olympics are out and election season is in full swing.  Mitt Romney announced that Paul Ryan will be his running mate on the Republican ticket just as London's Closing Ceremonies were set to take place and as the announcement came, cable news networks rejoiced.

Election season can be a hard pill to swallow. The ads can be ludicrous, the pundits barely come up for air, the volley of statistics and accusations is endless. . . it’s just exhausting.

I know it’s important to pay attention, but to what or whom should we be listening to? The messages are so convoluted, even an honest attempt at genuine journalism is confusing.

Campaign strategists for each candidate do not have an easy job these next three months – how are they supposed to effectively communicate their candidate’s platform among such a tidal wave of messaging?

If you could offer a PR tip to either candidate this election season, what would it be? It is a public relations challenge in need of some Olympian strength.