Remembering Al Neuharth, the Legacy of the S.O.B. 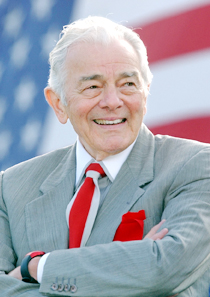 Before the conference, my mom took me to Lord & Taylor to buy the first suit I’d ever owned (it had shoulder pads). And I got the lady at the Lancome counter at the mall to show me how to properly apply make-up so I didn’t look like Avril Lavigne (I was in my “very heavy eyeliner phase” at the time).

The Freedom Forum through the Al Neuharth Free Spirit Program, brought us all to D.C. to meet with such journalism hot shots as Tim Russert, Brian Lamb and John King. In addition to panel after panel of media luminaries, we were introduced to the modern-day free sprits Al admired so much. That year, the honorees included Jack Lalanne and Bethany Hamilton.

Al made frequent appearances throughout our week in DC. In no uncertain terms, he told us we were the future of journalism. The quality of that future, he said, was dependent on our protection of the First Amendment.

While Al always referred to himself as an S.O.B., he told us we were to be “free spirits.” (As Al demonstrated, an S.O.B. and free spirit can, in fact, be one in the same.) He encouraged us not to simply pursue our passions, but to advocate for something better and bigger than ourselves in the world.

Today among my classmates from the 2005 Al Neuharth Free Spirit scholars, there are staffers everywhere from The New York Times, The Washington Post and ABC News, to China Economic Review, the Omaha World-Herald, Lansing State Journal and the Salt Lake City Tribune.

In addition to my classmates’ journalistic accolades, we also have at least one Fulbright Scholar, a professor, several teachers, a fitness guru, a few flacks (like myself), and a wealth of other career paths represented.

On October 21, 2012, around 100 Al Neuharth Free Spirit Scholars gathered at the Freedom Forum in Washington, D.C., for our first ever reunion.

We had lunch with Al and reflected on where we’d landed professionally and personally since our weeks spent in DC. We discussed how the lessons we’d learned from Al had guided us down the road. One of my 2005 classmates intimated that his cousins referred to Al Neuharth as “Uncle Al” because the scholarship Al had given him had helped his family pay for college.

One person after another stepped up to the microphone to thank Al for his generosity, not just financially or professionally, but personally.

There will be a lot of obituaries published on Al Neuharth in the coming days, as members of the media community reflect on the lasting impact Al made on the industry. None of them, however, can do justice to the generosity and idealism that he embodied for young journalists and aspiring world changers of all professions.

Bea Broderick shares her take on June's Pride Month and how all individuals can make American proud again.