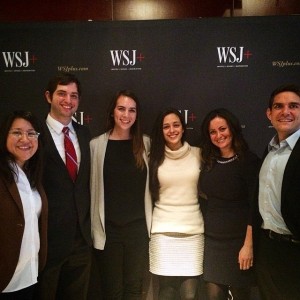 It's no surprise that the dynamic of the newsroom is changing, in large part due to social media. Last week, a number of us had the opportunity to learn about some of those changes at the WSJ's "Inside the Newsroom" event. Hosted by WSJ+, the event consisted of a five-person panel, a tour of the newsroom, the video production studio and even inside look at some of its famous stipple drawings! Included below are a few key takeaways from each of the esteemed panelists:

Emily Glazer, a banking reporter at WSJ, admitted to "going around the PR wall" to gain access to sources and information. Social media, particularly LinkedIn and Facebook, makes that considerably easier than it used to be. Emily explained that using social media allows her to qualify sources by observing certain characteristics of the individuals (their commenting habits, preferences, location, socio-economic status, etc.). For example, by trolling the comments sections on Facebook, she was able to locate a very specific type of person for her story on Wells Fargo (i.e., a low income consumer using multiple Wells products—checking, savings, CDs).

Emily's reliance on social media echoed a lot of points made by Carla Zanoni, the audience development director at WSJ. Carla noted that each morning meeting now includes the global conversation as told by social media. While the results of their social media analysis may not directly impact editorial direction, they can be used to determine which stories could use additional resources (i.e., a graphic, video, an extra blog post, etc.). In discussing today's age of journalism, Carla mentioned that she would like to begin seeing online WSJ stories shorten in length as they are churned out at a greater volume than ever before.

Almar Latour, an executive editor, made it a point to say that while social media has changed the newsroom, it does not relieve a reporter's responsibility to be accurate. WSJ reporters are still required to fact check everything that they put out. According to Almar, "The most profound change in the news is how we all consume the news." The general audience's ability to access news around the clock displaces the conventional deadlines that used to exist. Almar alludes to this as he rattles off the deadlines for today's journalists that dive deep into the night and early morning.

And yet, it is possible that of all the panelists, Jason Bellini and Jessica Yu are the most affected by social media. Jessica, a global visual editor, constantly creates interactive graphics to capture a younger audience. Jason, a senior producer at WSJ Video, laments that it is no longer enough for him to put out "good journalism" that attracts views. Now, his success is measured by how often the video is shared, which forces him to consider not only how newsworthy a story may be but also if it has the capability to go viral. While his job mainly consists of aligning popular WSJ editorial articles with his video content, he can on occasion create videos that inspire editorial content. It was Jason's last point, however, that punctuated the evening. We may exist in an age where puppy and cat videos and human interest stories rule the day, but WSJ subscribers represent an elite viewership that has maintained a hunger for genuine news and will continue to do so in spite of social media's advancements.

Thanks for reading and stay tuned for more information about the next WSJ+ event!

At the Hem of a Gladiator

As we closed out a monumental year, we asked our team of Partners to share their reflections on 2021 and what they are looking forward to in 2022. This is the second of a two-part series.